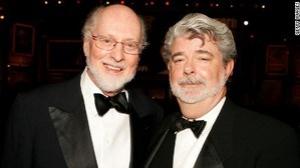 (CNN) -- For the first time ever, we're getting a live-action \"Star Wars\" movie without the man who composed the \"Star Wars\" theme.

Williams originally scored \"Star Wars\" and every other episode since then, including the upcoming \"Force Awakens\" later this year.

However, composer Alexandre Desplat has revealed that he will be working on 2016's \"Rogue One.\"

A \"Star Wars\" movie without that iconic Williams sound is certainly something that fans will have to get used to, and Desplat has a big job ahead of him.

Williams' work will also be absent from the next Steven Spielberg movie, \"Bridge of Lies,\" it was announced this week.

For the past three decades, Williams has scored every single Spielberg film, but the new movie, starring Tom Hanks and due out October 16, will be scored by Thomas Newman, best known for the score of \"American Beauty.\"

Another upcoming Spielberg movie, \"The BFG,\" will include a Williams score.