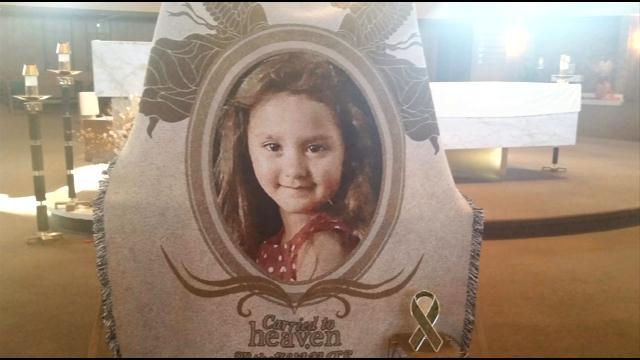 Hundreds attended a funeral for a five-year-old Milwaukee girl gunned down in a senseless act of deadly violence.

Services were held for Laylah Petersen at Our Lady of Good Hope Church Wednesday morning and lasted about an hour. It's been six days since the child was struck inside her home by gunfire that came from outside. At this time, Milwaukee Police have no leads in the case.

Officers at the department, alongside family, friends and strangers, solemnly walked inside the church in search of comfort and peace. Mayor Tom Barrett was also in attendance.

\"A place you would think would be the safest place in the world,\" said Mayor Tom Barrett. \"She loses her to total senseless violence. The Police are working around the clock to solve this case, and I'm confident we will solve it.\"

Between 2013 and 2014, the number of victims under the age of 13 multiplied from two to thirteen.

Richard Schwoegler, a family spokesperson said local faith based groups and the police department must work together to tackle the problem with ongoing neighborhood violence.

\"Not necessarily revitalize the economic part of it,\" said Richard Schwoegler. \"But the people part of it. That's what needs to be done, and the only way we can do that is by getting out of these four walls of our churches, and out on the streets.\"

Though it was a day of mourning, many people said it was also a day to rejoice and celebrate the life Petersen lived in her five short years. Many of them came with balloons, toys and stuffed animals. The items will be donated to Children's Hospital in Petersen's memory.

\"I'm going to miss her of course,\" family friend Austin Bullox said of Laylah. \"Hopefully nothing like this ever happens again to anybody because it's the worst feeling in the world when you see someone grow up and you have high expectations for them and their life gets cut so short.\"

Following the mass, a long line of cars made up a procession in route to Holy Cross Catholic Cemetery where Petersen will be laid to rest.

The community can help the family with funeral costs by donating to a fund set up in Laylah Petersen's name.

Loved ones are also calling on the community to call police with any information they have about this case. There is a $10,000 reward for tips that led to an arrest and conviction and callers can remain anonymous. The number to Milwaukee Police is (414) 935-7360.