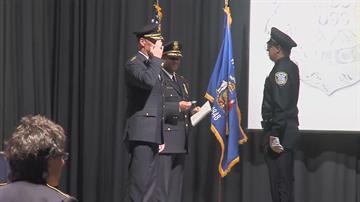 MILWAUKEE -- The process to apply for Milwaukee Police officer jobs opened to city residents Friday.  The mayor hopes to see plenty of qualified minority applicants to diversify the force and many community leaders say it's about time.

\"You don't change systems from the outside, you change them from within,\" Milwaukee Inner-City Congregations for Hope President Willie Brisco said.

Changes to who MPD hires that Reverend Brisco knows will take some time.

\"Most African American young men know the anger and frustration in this community and they would be able to police it a lot better,\" Brisco said.

Brisco thinks MPD has a decent mix of  minority officers.  But as the department looks for new recruits, he wants to see more African Americans patrolling black neighborhoods.

\"Most of our young men are looking for the American dream,\" Brisco said.  \"Jobs, careers, ways to support their families.\"

Brisco says controversies like the Dontre Hamilton shooting in Red Arrow Park make some African Americans question the honor in serving on the force.

Mayor Tom Barrett says this hiring cycle is all about diversity.

\"You have better police-community relations when you've got police officers in a police department that reflects the diversity of our community,\" Barrett said.

\"The Milwaukee Police Department has great officers that work for them, but it always is a little bit better to have somebody that looks like you when you are responding to a call or dealing with a police officer,\" Ayala said.

Ayala admits the qualifications are tough, but important to help find the best candidates.

\"It is fair to everybody, I mean the process alone is a difficult process, but that's why the NLPOA is committed to helping any candidate,\" Ayala said.

You can find the application here.  The system is open through October 17th.