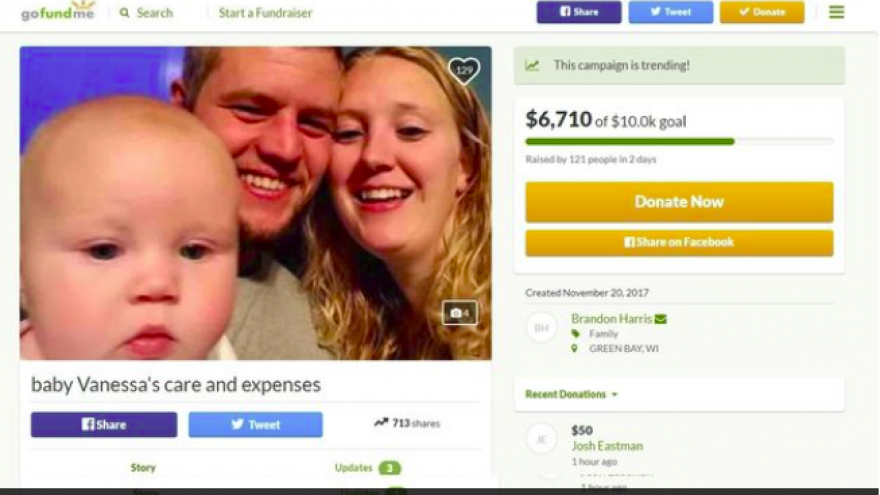 ORFORDVILLE, Wis. - (WISC) A small community is taking a family’s tragedy and giving them hope.

Melissa Whitten, 27, was killed in a car crash Nov. 16 in the Town of Beloit. Her 5-month-old daughter, Vanessa, was in the pickup truck with her, but miraculously was not hurt.

Family and friends started using Facebook to request breast milk for Vanessa and help for her father, Ethan. More than 1,000 people shared the original post.

“Our hearts are full from the outreach from the area communities and throughout the state of Wisconsin,” said Jamee Vance, Ethan’s aunt, on Facebook. “From the tragedy last week to this week of Thanksgiving, we have sadness but also great thanks for all of you.”

A special Facebook group was created called the Whitten Baby Emergency Assistance Group. According to posts in the group, the family has received so many donations of breast milk, they can’t stock it all. One family friend told News 3 they had received more than 1,000 ounces of breast milk. They say they’ve created a waiting list for people still interested in donating.

“For the breast feeding mothers, you have honored Melissa in a way no one else can and this act of kindness is unimaginable and so gracious,” Vance wrote on Facebook. “We thank you ladies tremendously.”

The family is also collecting clothing, cloth diapers, wipes, baby food and gift cards for the dad and daughter. 100 Proof Design Co., a small business in Orfordville, is collecting items to give to the family.

“It’s going to take a village, but that’s exactly what we have,” said Becky Strupp, the owner of 100 Proof Design Co.

The family has also set up a GoFundMe page, which has raised more than half of the $10,000 goal in about two days.

An account at Farmers and Merchants Bank in Orfordville also has been set up for people interested in donating money to the Whitten family.