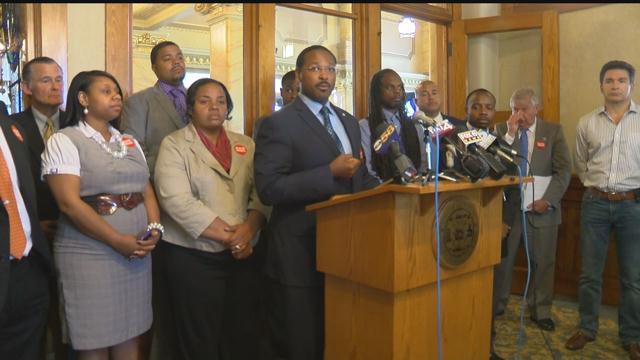 Members of the Milwaukee Common Council today outlined a new, multi-pronged approach to public safety that engages community members, civic leaders and police in combating the epidemic of violent crime in the city, issuing an “All Hands Call” for a peaceful summer.

“For too long, the mindset has been that there’s an inevitable conflict inherent in the job of rooting out violent crime in Milwaukee,” said Common Council President Ashanti Hamilton.

“My colleagues and I stand together today to voice our declaration that there’s another way. We believe we can lead the way to a new approach that engages community members, civic leaders and police officers in stopping the violence.”

Together, they laid out three important areas of focus for addressing the city’s violent crime: engaging community members with a series of anti-violence events and initiatives, engaging civic leaders through special Public Safety Committee meetings intended to foster intergovernmental cooperation, and engaging police officers by ensuring the Milwaukee Police Department is adequately staffed to weather an upcoming wave of up to 540 retirements that is anticipated over the next 18 months.

Any effort to restore peace in the city’s neighborhoods will fall short without the buy-in and investment of residents themselves, President Hamilton said. By tapping into the individual skillsets of his Common Council colleagues, Hamilton said he has laid out a path for individual office-holders to foster that critical engagement.

Alderman Rainey will oversee a partnership with the Milwaukee Fatherhood Initiative, the Milwaukee Police Department Community Prosecution Unit and the Department of Neighborhood Services to initiate a series of night walks in problem areas throughout the city. Residents in those areas will be invited to participate, empowering them to take a stake in their neighborhood’s public safety while creating a visible deterrent to crime, and Rainey will leverage the Fatherhood Initiative to recruit 500 fathers and “father-figures” to play a role in engagement efforts.

Alderwoman Lewis will coordinate an “adopt-a-block” program where local churches will act as their neighborhood’s eyes and ears for the police department. A “Safe Summer Kickoff” event is planned for June 17 to further engage residents in fighting crime on their streets.

“This city is full of people who are sick and tired of seeing their neighbors’ names in headlines about death and tragedy,” President Hamilton said. “They’ll do what they can to stop the violence; they’re just waiting for someone to invite them to the table and empower them to take action.”

Additionally, Hamilton said the council had previously approved several key initiatives to improve conditions in neighborhoods. The President’s own “Safe Zones” initiative will staff “neighborhood ambassadors” in the Garden Homes and Franklin Heights areas to mediate conflicts and foster a sense of neighborhood pride. Alderwoman Coggs sponsored a program that will offer financial aid to nonprofit groups that wish to purchase foreclosed properties to use as community resource centers. And Alderman Stamper is leading an effort to revamp the city’s Residents Preference Program to ensure that workers who are hired for qualifying projects come from the city’s most distressed neighborhoods, creating pathways to permanent employment.

Alderman Donovan said a series of special Public Safety Committee meetings this summer (schedule attached) will offer civic leaders the same opportunity to join the fray and take collaborative action. Each special meeting will examine the role of a different facet of the public safety process, starting with the police department on June 6.
“I hope these meetings prove to be a valuable opportunity to foster collaboration between law enforcement and government agencies, while at the same time providing citizens with some insight into the public safety process,” Alderman Donovan said.

Additionally, Alderman Donovan said immediate action is needed to avert the potential effects of mass police retirements. According to an analysis by the Employes’ Retirement System, 209 officers will be eligible to retire this year, and another 122 will be retirement-eligible in 2017.

“We have been warning for years that this retirement wave would be coming, and now here it is,” Alderman Donovan said. “The bottom line is you cannot replace an officer who has 25-plus years on the job with a new recruit, but you need to take the steps necessary to fill those positions now.”

Alderman Donovan, President Hamilton and nine of their colleagues delivered a letter to Mayor Tom Barrett on Wednesday asking him to include in his proposed 2017 executive budget sufficient funding to address the police staffing issue.