Commentary: A look back at some of my favorite stories of 2014, Arts @ Large 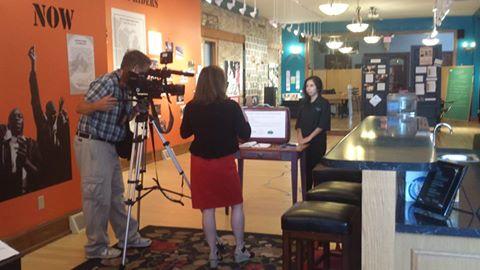 This past summer I had the honor of meeting some MPS students who retraced the steps of the original "Freedom Riders" during the Civil Rights movement of the 1960's.

They're trip was made possible through a program called "Arts at Large" located in Walker's Point that uses art as a form of expression and education.

The students' displays, artwork and poetry served as a reminder about how far we've come, but also was a call to keep moving forward.

Louis Eduaro Irizarry-Borreli,13 of the Milwaukee Academy of Chinese Language put together a display showing how blacks were denied the right to vote.

"For the literacy test there were questions like how many bubbles in a bar of soap," explained Louis, "But that's a question no one can answer. Even if you guessed all the jellybeans in the jar they would say you're off by three or you're off by four."

Teri Sullivan of  "Arts at Large" says these types of projects get students "actively engages in the research in interviewing people."

Biluge Ntabala, 14, of the  Milwaukee High School of the Arts wrote a moving poem, recalling those fateful steps of those demanding equal rights.

"Your step have given you the power to see other culture with peace," she concluded.

What struck the students is that they were able to walk across safely, the same could not be said for those in the original march.

MPS School Board member Mark Sain said it's the kind of lesson you can't teach in a classroom. "Help us to respect each other's differences and this will help our young people co-exist no matter where they are."

The positive result has now garnered Arts At Large special recognition at the 2014 "Fellowship Open" which raises money to ensure that programs like this keep going and that young people see a path of their choosing.

I have had the honor to serve as emcee for the annual Golf Outing and awards presentation that follows. Over the years, this unique gathering has raised hundreds of thousands of dollars to ensure that young people, especially African American young men, get the opportunity to further their education.

Fellowship Open Honorary Chair John Daniels, Jr. told me that "The young people actually come to the tournament. It really is a life changing experience where they meet people in their field where they aspire to be."