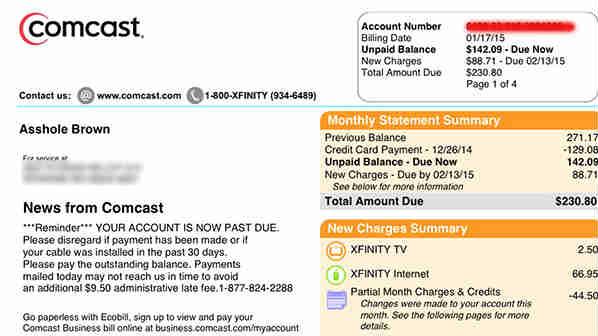 (CBS NEWS)You know they may be thinking it about you, when you're arguing with a customer service representative.

But it's a stretch when you actually see it in writing: \"A**hole\".

That's what happened to a Spokane, Washington couple after they sparred about their bill with a customer service representative from Comcast. When Ricardo and Lisa Brown got their monthly service bill, the husband's name had been changed from Ricardo Brown to \"A**hole Brown.\"

To make maters worse, Lisa Brown met resistance trying to get the profanity removed and the billing name corrected. That's when she reached out to a consumer advocacy writer, Christopher Elliott, who writes on travel and consumer affairs for The Washington Post, USA Today and other other publications. The Brown's Comcast saga was first reported in Elliott.org.

\"You know employees talk about customers behind their back and say things like this,\" Elliott told CBS News. \"But I've never seen anyone put something like this in writing. This falls into the category of 'What were they thinking?'\"

Brown told Elliott the family was having financial difficulties. She'd called Comcast to cancel the cable portion of her account, for which she had to pay a $60 fee. The representative, however, escalated her call to a retention specialist who tried to persuade her to keep the cable service and sign a new two-year contract.

\"I am shocked,\" Brown told Elliott. \"I was never rude. It could have been that person was upset because I didn't take the offer.\"

CBS News requested comment from Comcast Wednesday night but did not receive an immediate reply. In reporting the story, Elliott spoke with Steve Kipp, Comcast's vice president of communications for the Washington region, who gave this statement:

\"We have spoken with our customer and apologized for this completely unacceptable and inappropriate name change,\" he said. \"We have zero tolerance for this type of disrespectful behavior and are conducting a thorough investigation to determine what happened. We are working with our customer to make this right and will take appropriate steps to prevent this from happening again.\"

It's not the first public relations black-eye for Philadelphia-based Comcast, the country's largest cable service provider. Last August, CBSNews.com reported how one customer was put on hold for three hours while trying to cancel service. Another customer recorded the difficulty he had canceling service over an eight-minute phone call.

\"I'm a bit stunned by this\" said Elliott. \"Comcast is a big company. They can't control all their employees. But you'd think this is part of the basic training they give to their employees -- don't call your customers a-holes\"