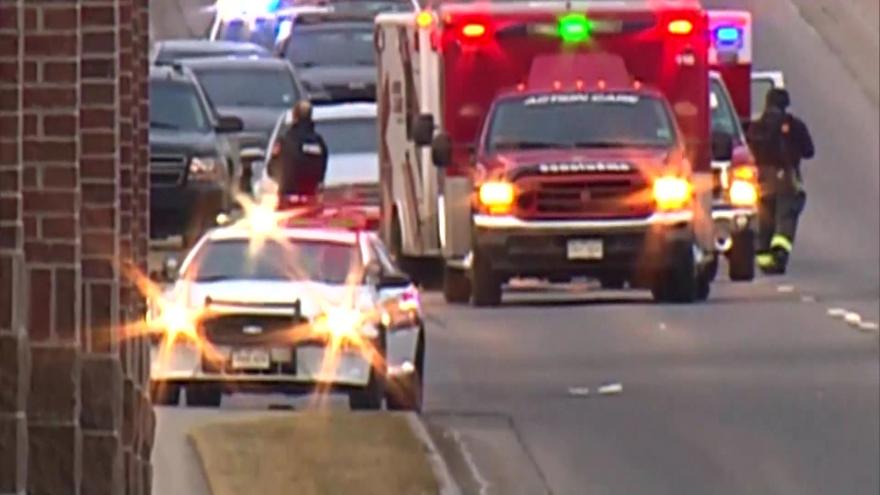 DENVER (AP) — Colorado authorities were contacted with concerns about the mental health of Matthew Riehl over a month before he shot and killed a deputy and wounded four others. But the 37-year-old man was never held for a mental health evaluation.

Authorities say Riehl fired more than 100 rounds in his suburban Denver apartment before he was killed by a SWAT team on Sunday.

Wyoming College of Law students had been warned about Riehl, a former student, because of social media posts critical of professors at the school in Laramie, reported KTWO-AM in Casper, Wyoming.

A Nov. 6 email from Assistant College of Law Dean Lindsay Hoyt told students to notify campus police if they spotted Riehl or his car near campus. In addition, security on campus was increased for several days.

"Wyoming statutes are pretty clear: If someone is not making an immediate threat, they cannot be held for a mental evaluation. They are very tough cases," Samp said.

Early Sunday, authorities responded to a complaint of a verbal disturbance involving two men at an apartment building in Highlands Ranch, 16 miles (about 25 kilometers) south of Denver. A caller said Riehl was acting bizarre and might be having a mental breakdown, but responding deputies found no evidence of a crime and left.

When deputies were called back to the scene, a man who had left gave them a key and granted permission to enter the apartment.

Douglas County Sheriff Tony Spurlock said deputies came under fire almost immediately after trying to talk with the suspect, who was holed up inside a bedroom.

"They all went down almost within seconds of each other, so it was more of an ambush-type of attack on our officers," Spurlock said.

The wounded deputies tried to pull the fallen officer, Zackari Parrish, out of the line of further gunfire but were unable to because of their own injuries and only managed to "crawl to safety," Spurlock said. Two civilians also were injured.

All of the wounded except Deputy Jeff Pelle, 32, have been treated at hospitals and released. The son of Boulder County Sheriff Joe Pelle was in fair condition.

Hundreds gathered Monday night for a candlelight vigil for Parrish inside Mission Hills Church in Littleton, Colorado — the church he attended with his wife and two young daughters.

"I've heard from so many different people that he just loved his community and being a police officer," Mission Hills Pastor Craig Smith told KDVR-TV.

"Zack didn't see law enforcement as a job. He saw it as a calling, as a way to serve his community and a blessing."