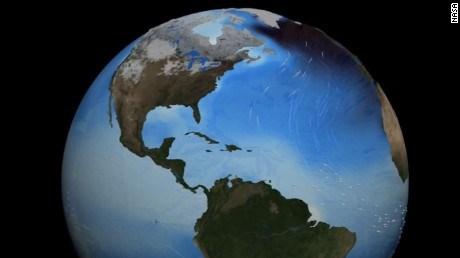 (CNN)At first glance, it stands out like a sore thumb. That blob of blue and purple on the map. One of the only places on the globe that is abnormally cold in a year that will likely shatter records as the warmest globally.

It's being called the Atlantic "blob." It's a large area in the North Atlantic that is seeing a pronounced cooling trend. The ocean surface is much cooler than normal and in fact record cold in some locations.

Scientists began to notice it developing over the last couple of years, this cooling in the Atlantic is the complete opposite of the warming over in the Pacific. Much of the warming is attributed to El Nino, a natural process where warm water sloshes over the Central Pacific and extends to South America, but scientists are unable to completely explain what has been dubbed the Pacific Blob. This pronounced warming over large areas of the entire Pacific basin has fueled a well above average season for hurricanes and typhoons over the entire Pacific, and could have contributed to everything from the California drought, impacts on the salmon industry, and even tropical sharks seen in waters further north than ever before.

The Atlantic cold blob is near Greenland. You may not expect to see such a pronounced cooling that far north. After all, we know that most of the documented climate change has impacted the poles much more than equatorial regions. Greenland is home to an enormous sheet of ice.

In fact, if you combine the ice sheets of Antarctica and Greenland, you will find 99% of the freshwater ice on earth. Scientists believe it is the melting of ice in Greenland that is causing the cold anomaly.

A recent study by top climatologists shows massive ice-loss is occurring over Greenland and is disturbing the normal Atlantic Ocean circulation, called the Atlantic Meridional Overturning Circulation (AMOC). You may be familiar with part of this circulation, the Gulf Stream, which brings warm, tropical surface water northward along the East Coast of the U.S. and funnels towards the poles. The other main current in the AMOC is a return flow of deep, cold water that runs southward from the poles towards the tropics. This current has dramatic impacts on our weather globally. The heat and cold driven by the current transfer to the atmosphere and help to drive our weather patterns.

Normally, cold salt water in the North Atlantic sinks, because it is denser, and it is replaced by warm water moving in from the south. It's a similar process that drives the high and low pressure systems and Jetstream that drive our weather. In this case, the study suggests that the massive amounts of freshwater melting into the ocean from Greenland can prevent the sinking of the dense, cold, salty water and alter the AMOC circulation.

Believe it or not, this was the very scenario in the popular movie "The Day After Tomorrow.". In the movie, the global climate changes in a matter of days, causing tornadoes in Los Angeles, deadly hail in Tokyo, and a massive blizzard in New York City.

Fortunately "The Day After Tomorrow" scenario is Hollywood fiction at its best, and not based on sound science. That said , there is cause for concern that the changes we have observed in both the Atlantic and Pacific. While there is certainly not scientific consensus that either the Pacific or Atlantic blob is related to climate change, there is evidence that is the case. The impacts, while not like the movie, could be bad enough. The loss of the normal ocean circulation could cause drastic shifts in weather patterns, and continued loss of ice in Greenland will lead to the continued rise in sea level, threatening coastal cities around the globe.