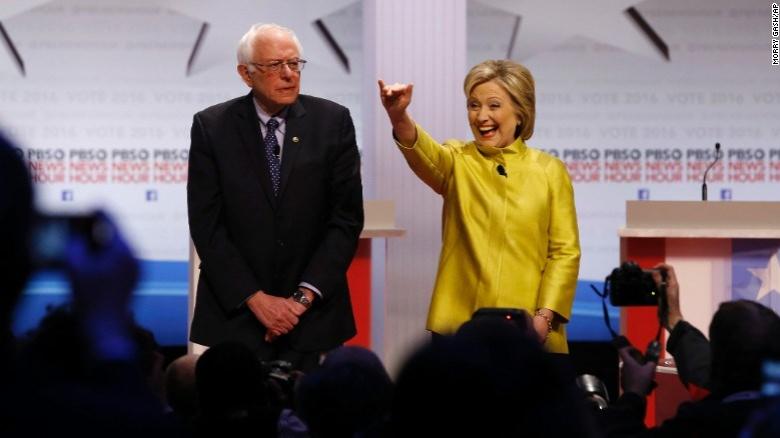 (CNN)The days of Hillary Clinton subtly separating herself from President Barack Obama on one policy or another are over: she won the debate in Milwaukee by lavishly and repeatedly praising Obama -- and delivered a sharp rebuke to Sen. Bernie Sanders for criticizing the President.

"The kind of criticism we've heard from Senator Sanders about our President, I expect from Republicans," she said in the closing minutes of the debate. "I do not expect from someone running for the Democratic nomination to succeed President Obama."Clinton's sudden bombshell was delivered so late in the proceedings that Sanders had no choice but to use part of his closing statement to respond. "Madam Secretary, that is a low blow," he said. "I think it is really unfair to suggest I have not been supportive of the President."

The exchange capped a night in which Clinton drew on her experience as a debater to outpoint Sanders.

Playing to the home crowd, she attacked Wisconsin Gov. Scott Walker, the conservative Republican who has tangled with labor unions in bitter battles in recent years. When talk turned to ending racial bias in the criminal justice system, it was Clinton, not Sanders, who dropped a reference to the killing of Dontre Hamilton, a man shot more than a dozen times by a Milwaukee police officer in 2014.

But most of all, in a straightforward pitch to black voters -- who will make up an estimated 60% of the ballots cast in the South Carolina primary later this month -- Clinton suggested that Sanders has not been sufficiently loyal to Obama, who is beloved by his community.

It was an extension of an endorsement of Clinton earlier in the day by members of the Congressional Black Caucus. The lawmakers didn't just declare support for Clinton; they went out of their way to attack Sanders."When you start saying 'free college,' 'free health care,' the only thing you're leaving out is a free car and a free home," said Rep. Cedric Richmond of Louisiana at the endorsement news conference, referring to Sanders' policy proposals. "Who is going to pay for it? How are you going to pay for it?"

Clinton echoed the same sentiment during the debate, accusing Sanders of advancing expensive proposals that would swell government by 40% (an accusation Sanders did not refute during the debate).

She also caught a lucky break: earlier in the day, the Clinton Foundation acknowledged receiving a federal subpoena for potentially sensitive documents about the charity, but the debate's moderators inexplicably did not ask any questions about the bombshell news, and Sanders did not raise the issue.

So Clinton ended up with an effective day on the campaign trail followed by a solid debate.

Of course, her campaigns still faces daunting problems: Sanders is still raising money at a fast pace and electrifying crowds around the nation, especially among young people. But to the extent the debate was a matter of advancing closer to victory in the upcoming South Carolina contest, Clinton definitely won.