Clinton campaign chair: 'The American people can handle the truth' on UFOs 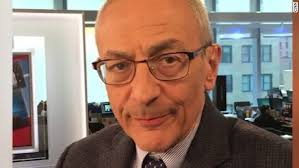 Washington (CNN)There has long been an air of conspiracy surrounding theories of alien life, and the head of Hillary Clinton's campaign said Thursday it's time to do away with the secrecy.

CNN's Jake Tapper pulled aside Clinton campaign chair John Podesta, who was a guest on "The Lead," to talk aliens.

"The U.S. government could do a much better job in answering the quite legitimate questions that people have about what's going on with unidentified aerial phenomena," Podesta said.

Podesta has made his interest in the possibility of alien life and conspiratorial leanings toward Area 51 well known. During his time serving in the Obama administration, Podesta tweeted, "Finally, my biggest failure of 2014: Once again not securing the #disclosure of the UFO files. #thetruthisstilloutthere cc: @NYTimesDowd."Clinton herself pledged in January to "get to the bottom" of whether rumors of U.S. contact with extraterrestrial life were true.

In regard to Area 51, Podesta echoed Clinton's call, saying, "What I've talked to the secretary about, and what she's said now in public, is that if she's elected president, when she gets into office, she'll ask for as many records as the United States federal government has to be declassified, and I think that's a commitment that she intends to keep and that I intend to hold her to."

Asked if there is evidence of alien life, Podesta said, "That's for the public to judge once they've seen all the evidence that the U.S. government has."

When it came to his own beliefs about beings from outer space, Podesta said, "There are a lot of planets out there."

And he made clear: "The American people can handle the truth."