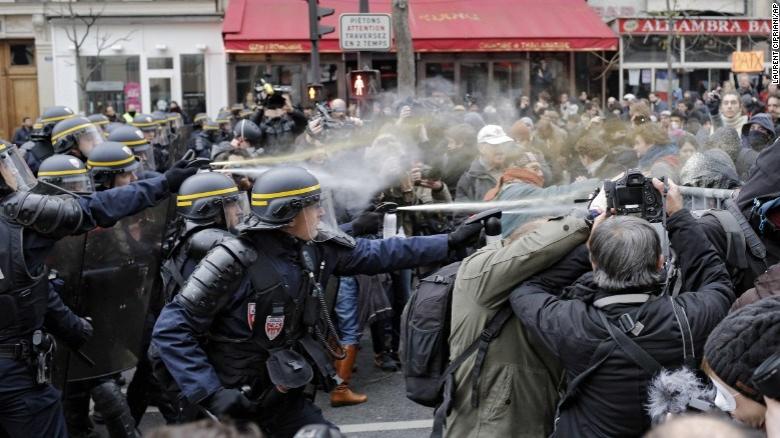 (CNN)Nearly 150 world leaders are meeting in Paris over one mission: Agree on legally binding reductions in greenhouse gas emissions.

As global average temperatures soar, they will try to get a handle on the cause.

On Monday, the leaders of the main players necessary to achieve the ambitious goal -- China and the United States -- will sit down together at the COP21. They are also the largest producers of greenhouse gases.

COP stands for Conference of Parties, an annual forum to try to tackle climate on a global political level.

The COP21, also named the Paris Climate Change Conference, kicks off under the specter of the November 13 terror attacks in Paris that killed 130, and world leaders will observe a moment of silence in honor of the victims on Monday.

Authorities have clamped down on anti-global warming demonstrations in the city out of security concerns.

Nevertheless, disappointed demonstrators turned out on Sunday, and brief clashes erupted with police at the Place de la Republique, where peaceful protesters had placed rows of shoes and name tags to represent the crowds not allowed to show up.

But violent protesters pelted officers with shoes, bottles and even candles police said were taken from memorials to those killed in the terror attacks, and police arrested more than 200 people.

Paris Police Chief Michel Cadot said taking the candles and using them against police showed "an extreme lack of respect to those events."

French President Francois Hollande called the clashes "scandalous" and said authorities knew "troubling elements" would arrive in Paris for the talks and said that was why "these sorts of assemblies were banned and some were ordered to stay home."

In many countries, people gathered to protest against human-made climate change on Sunday. There is a broad consensus among scientists that global warming is driven by human activity, foremost the burning of fossil fuels.A look at the history of the COP illustrates the challenge in achieving this year's goal of a legally binding agreement -- especially when it comes to the biggest greenhouse gas emitters.

Probably the best-known milestone to come out of a previous COP was the adoption of the Kyoto Protocol, a nonbinding agreement by 192 states to lower greenhouse gas emissions to 5% below 1990 levels between 2008 and 2012.

The United States did not ratify the Kyoto Protocol and dropped out of it completely in 2001. Canada dumped it, too, and China, India and other developing countries were exempt from it.

It has taken 20 years of U.N. negotiations to reach this attempt at a legally binding global emissions agreement to prevent a global average temperature rise of 2 degrees Celsius higher than during preindustrial times, COP organizers have said.

President Hollande met with U.N. Secretary-General Ban Ki-moon on Sunday. Afterward, Ban's office released a statement praising France for going ahead with the meeting despite the terror attack. He said he and Hollande had agreed that "failure to reach an agreement was not an option and would have disastrous consequences."