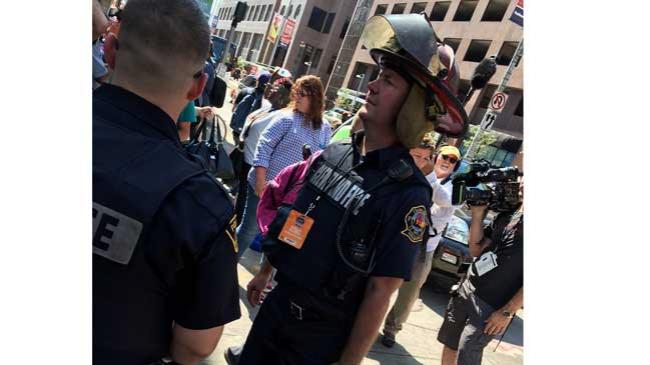 Cleveland (CNN)Cleveland police on Wednesday made multiple arrests and reported that two officers had been injured after a protester attempted to light an American flag on fire outside the security barrier surrounding the Republican National Convention.

The incident, which attracted upward of 200 law enforcement officers from dozens of departments, including Cleveland Police Chief Calvin Williams, was the most heated of what has been a mostly subdued protest scene in the city's downtown.
Cleveland police tweeted the officers' injuries were minor. At least five people could be seen being detained and Cleveland police tweeted that several people were arrested, but they did not provide further details.

Officers at Euclid and 4th with fire extinguishers for the rumored flag-burning. pic.twitter.com/csJlYCl38j

More than a dozen protesters and Donald Trump supporters had said that a group planned to burn a US flag, and officers and medics with fire extinguishers stood at the ready a block away on Euclid and E. 4th Street in the minutes before the incident kicked off.
Police moved in on foot and then horseback to secure the intersection outside the Quicken Loans Arena, where the convention is being held. A number of "Bikers for Trump" moved through the throngs, escorting a Republican National Committee delegate in the direction of her hotel while a man with a loudspeaker taunted anti-Trump protesters, one of whom was yelling, "America was never great."
Before Wednesday's confrontation, only five people had been arrested during the convention's first two days. Protests on Tuesday in nearby Public Square had attracted hundreds of police but no one was detained.
Share this article: