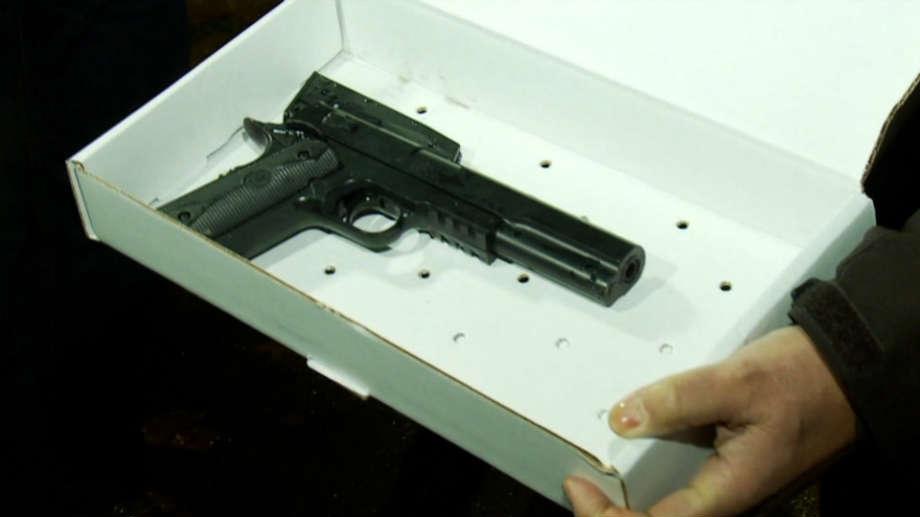 A law enforcement officer's quick decision is once again being put under a microscope.

On Monday, Cleveland police said officers fatally shot 12-year-old Tamir Rice as the youth reached for an air pistol in his waist. Chief Calvin Williams said the air pistol was \"indistinguishable from a real firearm.\" An orange tip indicating the gun was not a real firearm had been removed, police said.

\"Our officers at times are required to make critical decisions in a split second,\" Williams said at a news conference \"Unfortunately, this was one of those times.\"

The incident comes as the nation nervously awaits a grand jury decision on whether to charge the police officer who killed African-American teenager Michael Brown in Ferguson, Missouri, in August.

\"Ferguson being out there or not being out there doesn't matter,\" the mayor said at the news conference. \"This is about the fact that a young boy was shot and killed in Cleveland.\"

The attorney for the family of the Cleveland youngster, who also was black, downplayed any possible racial connotations to the shooting. Police have not disclosed the race of the officer who shot Tamir.

\"This is not a black and white issue. This is a right and wrong issue,\" attorney Tim Kucharski said.

Deputy Chief Ed Tomba said video showing the Saturday shooting exists, but he didn't say where the video comes from. He said representatives for Rice's family have viewed the video and the family will decide later whether to look at it.

Tomba said the video is not available for journalists now because it's part of an active investigation, which the department plans to complete in 90 days and send to the district attorney.

'There's a guy in there with a pistol'

The incident began Saturday when police were summoned to a city recreation center by a 911 caller who said someone -- possibly a juvenile -- was pointing \"a pistol\" at people.

\"There's a guy in there with a pistol, you know, it's probably fake, but he's like pointing it at everybody,\" the caller said.

\"He's sitting on a swing right now, but he's pulling it in and out of his pants and pointing it at people,\" the caller said. \"He's probably a juvenile, you know?\"

Police said it's not clear if the responding officers received the information about the age of the suspect or the gun being \"probably fake.\"

When the two officers arrived, the boy did not point the air gun at them or otherwise threaten them, Tomba told reporters Sunday.

But he did reach for the air gun, Tomba said.

\"The officers ordered him to stop and to show his hands, and he went into his waistband and pulled out the weapon,\" he said.

Tamir died early Sunday at MetroHealth Medical Center after surgery, according to the hospital and the family's attorney.

Tomba showed reporters the air gun the boy was said to be reaching for -- a large, black BB- or pellet-type replica gun resembling a semiautomatic pistol. An orange tip indicating the gun was not a real firearm had been removed, police said.

On Monday, Williams said that the \"facsimile weapon in this incident was indistinguishable from a real firearm.\"

Both officers have been placed on leave, police said.

The head of the police union said the officers followed protocols.

\"As they approached the male, they are screaming at him, 'Put your hands up, put your hands up' -- they don't want his hands to go anywhere down by the waistband,\" Cleveland Police Patrolman's Association President Jeff Follmer told CNN affiliate WJW.

\"I can tell you the officer that fired had no clue that he was 12, he just thought it was an older male. There was more concentration on his hands because we are taught in the academy that hands will kill you,\" Follmer told the station.

\"It wasn't a dog. It was a child. You didn't give him a chance. You just killed him,\" one man told CNN affiliate WEWS.

Someone claiming to represent the online activist group Anonymous claimed in a YouTube video to have taken down the city's website, blaming the shooting on what the speaker said was \"an overzealous rookie officer\" who resorted too quickly to lethal force.

\"Officers are equipped with many nonlethal options such as Taser guns,\" the speaker said. \"Why did he not use a Taser on this child? Shooting him in cold blood was not necessary with these nonlethal options available.\"

However, Follmer said officers had no way to know the air gun wasn't a real firearm.

\"You feel bad, after the fact, that it was a 12-year-old,\" he said. \"Nobody wants to shoot a 12-year-old, especially when they are holding a fake gun. But that's not the perception the officers had at that time.\"

Chief Williams said parents need to teach children that \"guns are not toys,\" whether they're real or fake.

Police shootings of African-Americans, particularly young men, have been under rising scrutiny in recent months after Brown's shooting following a brief confrontation in Ferguson.

A grand jury there is expected to soon make a decision whether Officer Darren Wilson should face criminal charges in that incident, which resulted in widespread protests over police violence against African-Americans.

CNN's Joseph Netto and Ronni Berke contributed to this report.