Cleanup continues in Burlington after severe storms cause damage 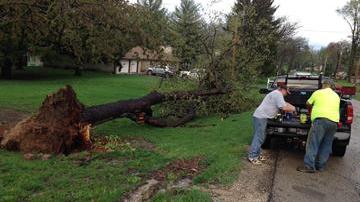 BURLINGTON - Residents in Burlington will continue working to clear debris Tuesday after several rounds of severe storms ripped through the area Monday.

A Doppler-indicated Tornado Warning was issued in Racine County, and although there's been no confirmation of a touchdown from the National Weather Service, Burlington residents say they already have a good idea of the storm's strength.

CBS 58 found widespread damage in Burlington Monday evening, including two pine tress that had fallen into a resident's pool.

People who rode out Monday's storms admitted they felt fear as heavy winds and rain passed through.

Local street flooding and ponding was reported throughout Southeastern Wisconsin.

There are no immediate reports of injuries in the area.