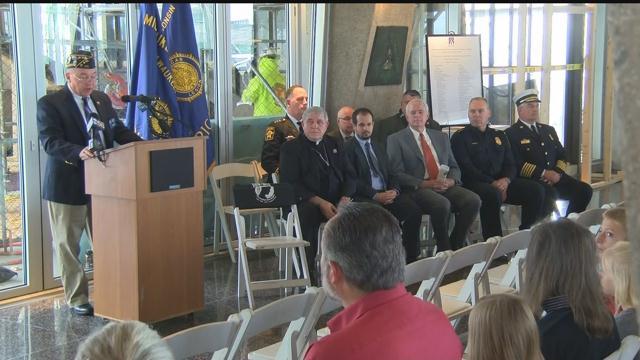 From organized ceremonies to private remembrances, Americans everywhere are honoring and showing their appreciation for members of our military past and present.

The City of Milwaukee has had a Veterans Day ceremony every year since 1939.

Friday morning, dozens of veterans from all military backgrounds participated in service at the war memorial.

They took time to salute the men and woman currently in the armed forces and those who have also passed away.

There was also a wreath that was laid and a rifle solute.

The keynote speaker was Archbishop Jerome Listecki, who has a military background himself.

"As awesome was the display of weaponry, weapons that could devastate towns and villages, I came quickly to understand that the real strength was in the men and woman who wore the uniform. Their discipline and character was impressive," says Archbishop Listecki.

The eternal flame was not used because of renovations outside of the war memorial. Most of the ceremony was inside.