City of Brookfield gets grant money to harness gas into electricity 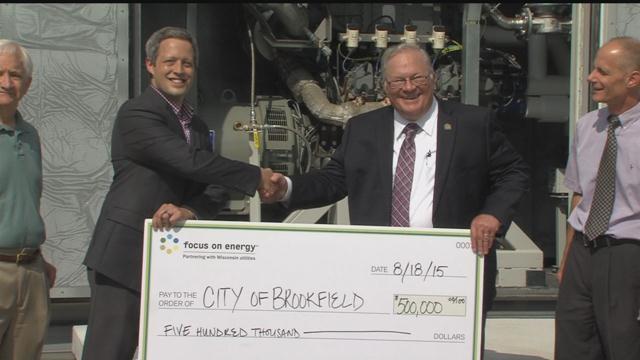 The City of Brookfield is using waste to generate electricity thanks to a $500,000 grant from Focus on Energy.

Methane gas produced during the waste water treatment process will be captured, cleaned, and burned efficiently in the generator to produce electricity for the plant.

\"We been looking at this for about ten years,\"  Project manager John Carlson told CBS 58's Michele McCormack. \"The grant money now makes it possible.\"

The gas would normally be burned off into the air.

\"It's utilizing a waste product that otherwise normally is wasted as well as the economics of it,\" said Joe Cantwell of Focus On Energy. \"It's a payback period. It will control costs.\"

The City of Brookfield says it could save as much as $200,000 annually.

That will probably keep sewer rates from going up.

We've attached the live interview with John Carlson who appeared on  the CBS 58 News at 4 p.m.

The Focus on Energy grant will offset a portion of the City's costs in installing a combined heat and power (CHP) project, which enables the City to generate electricity for use at the wastewater treatment plant.  The project included installation of a gas conditioning system, reciprocating engine, and electric generator.  Methane gas produced as a byproduct during the waste water treatment process is captured, cleaned and burned efficiently in the generator to produce electricity for the plant's needs.  Waste heat from the generator engine is recovered to provide heat used in process.

Mayor Steve Ponto  accepted the check on behalf of the City.  He noted the beneficial impacts of the project, \"Focus on Energy is providing the funds that allow us to reduce our electric and natural gas purchases, and use a more energy efficient method to cover a portion of our utility needs.  We want to thank Focus on Energy for supporting this project, which is a win for utility customers, for the citizens of Brookfield and the five other communities served by this plant, and is good for the environment.\"