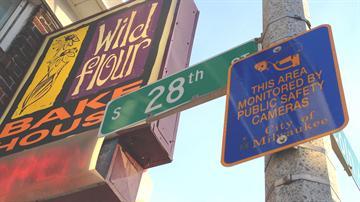 MILWAUKEE - Preventing and solving crimes is the goal of a program that will put more surveillance cameras on the streets of Milwaukee.

The plan consists of a $250,000 matching grant to help businesses install mounted police-monitored security cameras, like the ones outside of Wild Flour Bakery on the south side.

More than half of the funds is money Milwaukee police confiscated from drug dealers.

The rest is federal dollars.

City leaders say the surveillance cameras are an invaluable tool to deter and solve crime, when officers can't be everywhere.

Employees at Wild Flour Bakery have the experiences to prove it.

Melissa Ritchey was robbed at gunpoint in 2007. That's the same year cameras were installed under a city program called, \"Operation Impact.\"

The suspect was caught on tape, quickly arrested by police and is now in jail.

But that's not only crime she has caught in the act.

\"I was in my office and looking at the camera when I saw someone put cookies in their bag ,\" said Ritchey. \"I was able to run upstairs and say, 'hey get those out of your bag,' and I could show his picture to other employees.\"

Businesses can apply for the cameras through the Safe and Sound organization.

If approved, they'll pay $1,200 and the community grant administration will match the other $1,200.

The hope is to add hundreds of new cameras on streets across the city.

The pilot program expires at the end of the year.