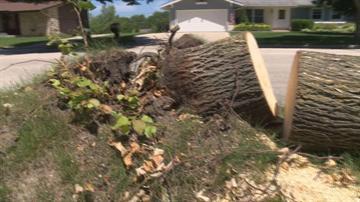 WAUKESHA -- In front of Doris Klitzke's curb sits a big reminder of the powerful storms that hit a week ago.

\"Down she went,\" Klizke said of the large tree on her lawn.  \"Too much water in the ground and they couldn't hold the trees.\"

Limbs and branches snapped on other trees around her property.  The 80-year-old grandmother finds herself still cleaning up the mess.

\"The forestry department came out and did the street and they were out pretty fast,\" Klizke said.  \"And when you saw all the damage, you wondered why they came and helped you.\"

Last Monday, streets around the neighborhood west of Springdale road were filled with debris, leaving hundreds of hours of work for city crews.  Monday night,  the streets are mainly clear, but plenty of work remains.

About a half-mile to the west, JH Loggers Tree Service crews kept grinding away -- working every day except the holiday since monday.

\"Morning 'till dark if we can,.\" owner Jeremy Hagan said.

Hagan says the significant damage here has helped his business, but it hasn't been easy.

Waukesha city workers are dealing with the same problems.  Mainly finished with the cosmetic clearing, the Parks, Rec and Forestry Department has more than 5500 trees to inspect in this neighborhood alone.

\"We have a lot of equipment that has been diverted from other regular middle of the summer type of duties and we're just working,\" Mayor Shawn Reilly said.  \"The city employees are working as hard as they can to take care of the problem.\"

Mayor Reilly says the crews have been working overtime, which impacts the budget, but he knows it's a step the city needs to take.

\"Everbody needs a little patience to get this done and complaining isn't going to help,\" Klizke said.  \"These workers have worked so hard and i think they deserve a lot of credit.\"

The mayor says most of the work should be done by the end of this week.  But finding hidden splinters and cracks in trees -- which can be dangerous in future storms -- could take until the end of the year.