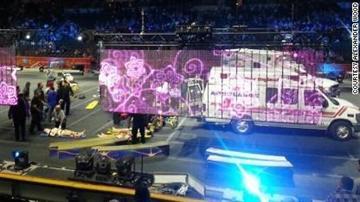 Eight performers fell when the hair-hang apparatus -- which holds performers by their hair -- failed, Payne added. Another performer was injured on the ground, he said.

The performers were among 11 people hospitalized with injuries related to the accident, Rhode Island Hospital spokeswoman Jill Reuter told CNN. One of those people was listed in critical condition, Reuter said.

It was not immediately clear who the other two victims were.

Multiple emergency units responded to the accident at the Dunkin' Donuts Center.

Eyewitnesses told CNN affiliate WPRI that they saw acrobats up on a type of aerial scaffolding doing a \"human chandelier\" when a cable snapped.

Payne told CNN's Fredricka Whitfield the apparatus had been used for multiple performances each week since Ringling Bros. and Barnum & Bailey lauched its \"Legends\" show in February.

\"Each and every time that we come to a new venue, all of the equipment that is used by this performer -- this group of performers as well as other performers -- is carefully inspected. We take the health and safety of our performers and our guests very seriously, and our company has a safety department that spends countless hours making sure that all of our equipment is indeed safe and effective for continued use,\" he said.

The circus and local authorities are investigating the incident together, Payne said.

\"The rest of the (11 a.m. Sunday) show was canceled and we're making a determination about the remainder of the shows for the Providence engagement,\" Payne said.