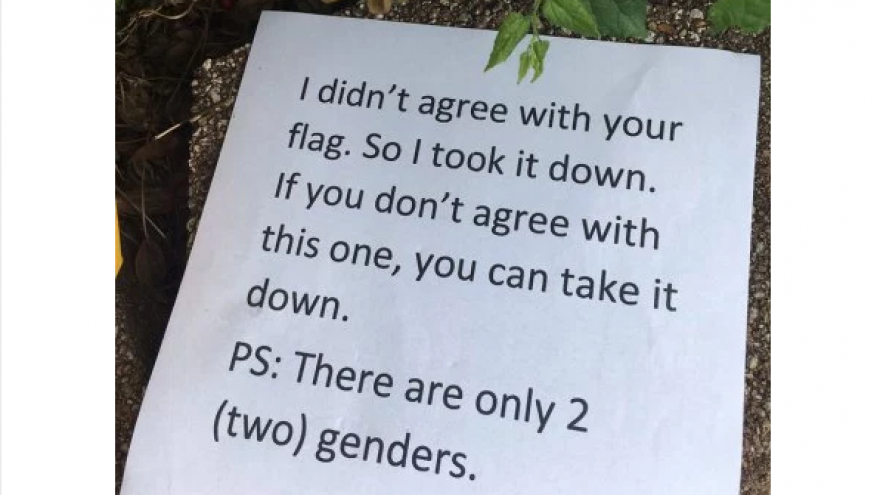 PLANO (CBSDFW.COM) – A Plano church is dealing with mystery Easter Sunday after someone swiped a rainbow flag outside of the sanctuary and replaced it with an American one.

The Community Unitarian Universalist Church prides itself in being open-minded which is why the symbol of the LGBT community sits outside the church.

“I’m glad that I’m part of this community,” church member Betsy Friauf said. “This church has courage in its convictions.”

The church said someone swapped their rainbow flag Saturday night for the stars and stripes.

The person also left an anonymous note that read, “I didn’t agree with your flag so I took it down. If you don’t agree with this one, you can take it down. P.S. there are only 2 genders.”

Reverend Patrick Price said the flag has never been targeted before.

Police said the theft could be considered a hate crime which could bring a higher charge if an arrest is made.

“While the way it was done was not traumatic, it’s not a crisis… we hope that it opens up a large dialogue with the community as a whole,” Rev. Price said.

The church, however, had a backup plan just in case the rainbow flag was vandalized or stolen.

“We’re not naive. We realize when we put up the first flag, we realized someone might decide they wanted to remove it without our permission,” Friauf said. “So we decided we would have a flag in reserve.”

Church members hope the new rainbow flag will be a symbol to a renewed commitment to being a welcoming congregation.