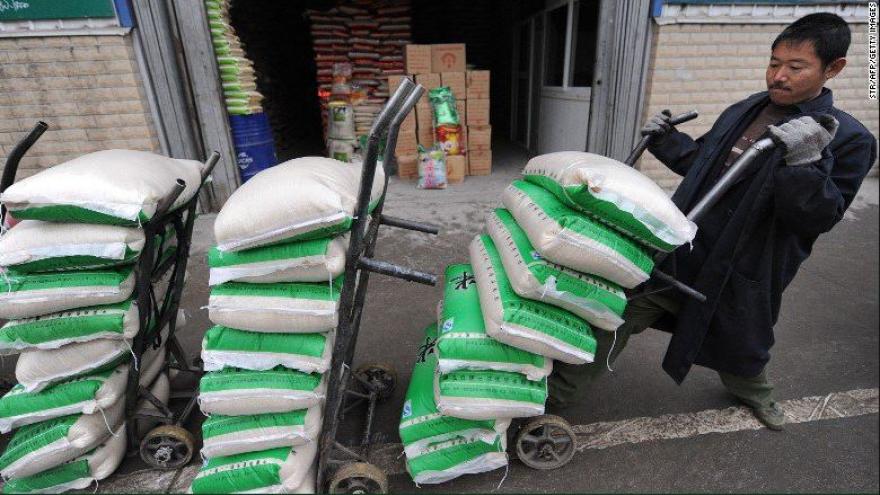 (CNNMoney) The world's largest rice producer is hungry for more and looking to the U.S. for supplies.

China will import American rice for the first time after a new trade deal was agreed to Thursday.

"The agreement with China has been in the works for more than a decade and I'm pleased to see it finally come to fruition, especially knowing how greatly it will benefit our growers and industry," said U.S. Agriculture Secretary Sonny Perdue in a statement.

China produces 20 times more rice than the U.S., but it's also the world's biggest consumer. Recently it has been buying more rice abroad, spending way over $1 billion in some years, to feed its population.

Last year, China imported about 5 million tons, according to the U.S. Department of Agriculture (USDA).

The U.S. alone couldn't satisfy that demand. America exports between 3 million and 4 million tons a year, according to the UN Food and Agriculture Organization.

China was once largely able to feed itself, especially with rice. But it's been relying more on imports in recent years, said Rob Bailey, an expert in food security at Chatham House, a policy institute in London.

Bailey said China was being smart in finding new sources of rice because temporary export bans from other Asian countries have caused problems in the past.

"China's probably thinking, 'If we are going to import rice, let's not be too reliant on the Asian market'," he said.

The USDA said exports to China can begin once Chinese officials have completed an audit of U.S. rice facilities.

China's Ministry of Agriculture and Ministry of Commerce did not immediately respond to requests for comment.

The breakthrough comes two months after the U.S. Commerce Department announced a dealthat will allow U.S. beef and natural gas exports to flow into China.

And it comes in the week that top Chinese and U.S. officials met to talk about trade.

Nevertheless, the relationship remains strained. President Trump has called out Beijing for what he considers to be unfair trading practices, and he wants to reduce America's huge trade deficitwith China.

This sentiment was echoed by U.S. officials after the Wednesday meetings, with a statement saying there was a "shared objective to reduce the trade deficit" with China.

A Chinese statement that came out later mentioned the deficit, but focused on many more issues that the two sides should cooperate on over the coming year.

Meanwhile, the issue of steel trade continues to be a delicate matter. Trump's administration may soon slap tariffs on Chinese shipments of steel to the U.S.