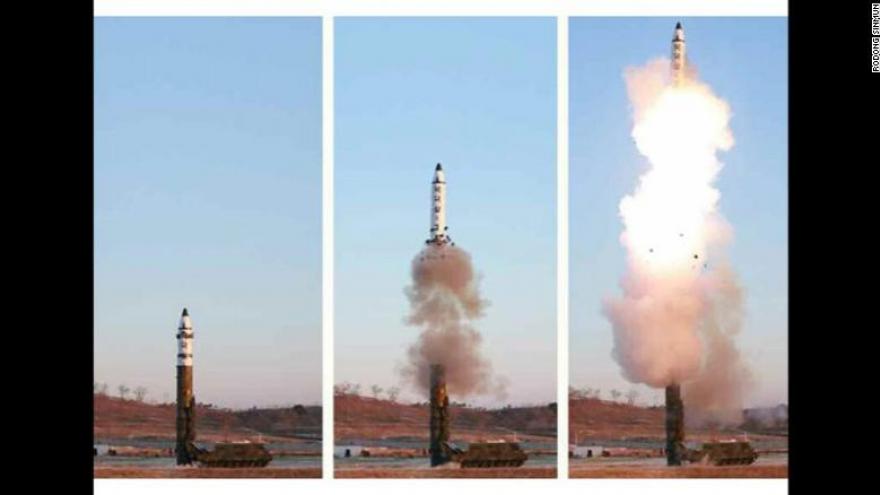 Hong Kong (CNN)China has condemned North Korea's test of a reportedly new missile more than 24 hours after news of the launch broke.

"Under current circumstances, relevant sides should not provoke each other or take actions that would escalate tensions on the Korean Peninsula," Chinese Foreign Ministry spokesman Geng Shuang said at a regular press briefing Monday.

Russia's Foreign Ministry also spoke out against the test, the first since US President Donald Trump's inauguration, saying in a statement that it was in "defiant disregard" of UN resolutions.

Russia and China were both members of the Six Party Talks -- a diplomatic attempt to curb North Korea's nuclear program that started in 2003 -- along with the United States, Japan, and North and South Korea.The missile North Korea fired was the Pukguksong-2, a previously unpublicized part of its arsenal, according to state media. It's a nuclear-capable, intermediate range ballistic missile -- which typically travel from 3,000 to 5,500 kilometers (1,864 to 3,417 miles).

The Pukguksong-2 is believed to have used a solid-fuel propelled engine which enables faster launch and increases the mobility of the launch process, according to a spokesman of the South Korean Joint Chiefs of Staff spokesman.

The Joint Chiefs also believe that Pyongyang employed a cold-launching system, in which the missile is lifted off the ground using pressure and then ignited mid-flight, as opposed to igniting it on the ground -- which is said to be less stable, the spokesman said.

A US official said the missile traveled 500 kilometers (310 miles) before landing in the Sea of Japan, also known as the East Sea, and that it was launched from North Pyongan province.North Korea's relationship with China -- its most important ally -- has kept Pyongyang afloat as sanctions have crippled and isolated it from the rest of the world.

But in recent years, China has taken a tougher line on the North Korean nuclear program, voting in favor of UN Security Council sanctions and issuing condemnations when it conducts provocative military tests.

China usually responds to North Korea's nuclear tests with a quick condemnation, but when it comes to missile tests, it depends on the type of missile and how the test was conducted, says Tong Zhao, an associate at the Carnegie Tsinghua Center for Global Policy.

"China might not interpret it (the Sunday test) as a provocation, but a call for attention," Zhao told CNN. "Clearly North Korea has been waiting for this new administration to reach out to North Korea.""Fundamentally, from the Chinese perspective, we need to create a situation where the nuclear weapons will be removed from the Democratic People's Republic of Korea and from the Korean peninsula," said Victor Gao, a Chinese international relations expert and former translator to late Chinese leader Deng Xiaoping.

"But on the other hand, the fundamental concerns of the government of the DPRK about its own survival should also be well taken care of."

Gao's last point -- that the concerns about the survival of Kim Jong Un's regime should be respected -- is perhaps the most important difference in the way China and the United States deal with the looming threat of a nuclear North Korea.

Kim might not be China's favorite neighbor, but analysts say it's a case of the devil you know versus the devil you don't."They're worried about a much more strategic issue, which is if South Korea is the successor state, if US troops are up on the Chinese border, it's a terrible defeat for China and victory for the US," said former US Ambassador to South Korea Christopher Hill.

"I know the Chinese worry that somehow the US will take strategic advantage of it."

It's in this light that China and Russia object to the Terminal High Altitude Area Defense (THAAD) missile system that South Korea and the United States says is key to stop an incoming North Korean nuke.

They see the system more provocatively, worrying the system will be used to track their missiles and help the US geopolitically contain the two countries.

An editorial in the provocative state-run Chinese tabloid Global Times, which often takes a harder line than official Chinese policy, predicted that the US and South Korea would use the launch as a way to speed up THAAD's deployment.

"Pyongyang's persistence in launching missiles will further provide an excuse to accelerate Washington and Seoul's pace to deploy the Terminal High Altitude Area Defense anti-missile system in South Korea, which damages China's strategic interests," the editorial read.China and the US are divided on what to do over North Korea.

Both countries are in favor of denuclearization on the Korean peninsula, but Trump has said publicly that China isn't doing enough to deter Pyongyang's nuclear ambitions.Japan also called Monday for China to take a stronger line on North Korea.

"We believe the role of China, that is the permanent member of United Nations Security Council and the chairman of the Six Party Talks, and holds 90% of North Korea's trade, is extremely significant," said Japanese Chief Cabinet Secretary Yoshihide Suga.There's also a political imperative for not going too hard on sanctions -- if they hit regular people hard, they could provoke a mass uprising and potentially push Kim out of power -- something China fears.The youngest Kim has been much more of a thorn in China's side than his father or grandfather.

"Kim Jong Il appeared to care what the Chinese thought," said Hill. "There is no sign whatsoever that his son, Kim Jong Un, first of all cares what the Chinese think -- let alone what we think -- nor has he at all expressed any interest in negotiation."The country fired off three ballistic missiles in September as China was hosting its first G20 summit. It was an event Beijing meticulously planned for -- shutting down factories, paying locals to leave and tightening security -- so that the event would go off without a hitch.It's nuclear test in January 2016 drew the ire of the Chinese as well; former CNN Beijing bureau chief Mike Chinoy called it "a real slap in the face" to the Chinese.

Kim was present at the site and personally gave the order for the launch, state media reported.