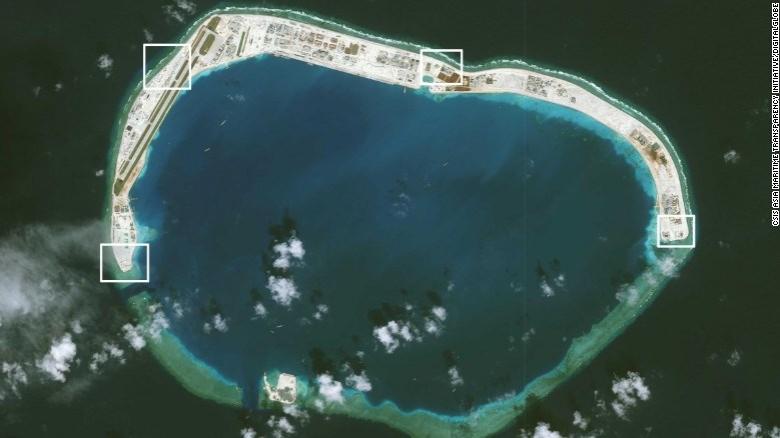 Hong Kong (CNN)New satellite imagery indicates that China has installed weapon systems on all seven artificial islands it has built in the contested waters of the South China Sea, a move that's likely alarm the country's neighbors.

The images, released by the Asia Maritime Transparency Initiative, show anti-aircraft guns plus other weapons systems that would guard against cruise missiles sitting in hexagonal structures on Fiery Cross, Mischief and Subi reefs, which the AMTI began tracking in June this year.

China has already built military-length airstrips on these islands, previous analysis by the AMTI, part of the Washington-based Center for Strategic and International Studies (CSIS), has shown.A satellite image of Johnson Reef taken on November 29. AMTI says the military structures on this island are less complex than the newer ones on Fiery Cross, Mischief, and Subi Reefs.

The think tank said that the weapon emplacements showed that "Beijing is serious about defense of its artificial islands in case of an armed contingency in the South China Sea."

"Among other things, they would be the last line of defense against cruise missiles launched by the United States or others against these soon-to-be-operational air bases," it added.

A spokesman for China's Ministry of Foreign Affairs said the islands were part of "China's inherent territories."

"It is quite normal to carry out construction on China's own territory and to deploy necessary national defense facilities," the spokesman, Geng Shuang, said.

AMTI said the weapons systems observed on the three largest islands China has built in the Spratlys were an evolution of smaller fortifications it had observed on the four other reefs China has reclaimed land at -- Gaven, Hughes, Johnson, and Cuarteron reefs.

The organization's findings come despite a pledge from President Xi Jinping that China has no intention of militarizing the islands.

China's Ministry of Foreign Affairs didn't immediately respond to a request for comment."It gives every impression of being a land-based attempt to put close-in weapons systems, that you would normally find on a naval ship, on a concrete superstructure on these features to provide some sort of close-in, last-ditch.... rapid-firing weapons system to try and defeat approaching cruise missiles," retired US Adm. Michael McDevitt of the Center for Naval Analyses told AMTI in a podcast.Some have called the islands China's "unsinkable aircraft carriers."

China has already deployed surface-to-air missiles on Woody Island, part of the Paracel island chain -- to the west of the Spratlys in the hotly disputed sea.

According to the US, China has reclaimed 3,000 acres in the Spratly Islands since the beginning of 2014.

Vietnam, Malaysia, the Philippines and Taiwan have also reclaimed land in the South China Sea, but their land grab -- the US says approximately 100 acres over 45 years -- is dwarfed by China's massive, recent buildup.

The Philippines, which lies geographically closest to the Spratlys, has troops stationed in the area, as do other claimants.

The US takes no position on the territorial dispute in the South China Sea but its warships have conducted "freedom of navigation" operations near the reclaimed islands, eliciting warnings from Beijing.

US Adm. Harry Harris, commander of US Pacific Command, said Wednesday that the US stood ready to confront Beijing over the contested waters.

"I've also been loud and clear that we will not allow the shared domains to be closed down unilaterally - no matter how many bases are built on artificial features in the South China Sea," he said in a speech in Sydney.

"I say this often but it's worth repeating -- we will cooperate where we can and be ready to confront where we must."