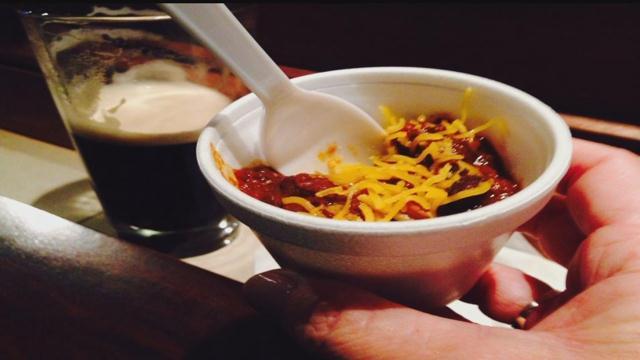 This Saturday is the 15th annual chili cook off to raise money for the Greater Milwaukee Fire and Police Pipes and Drums.

The event starts at noon and runs until 6 p.m. The $10 ticket price gets you a free sample of each of the competing entries and chances in a raffle for some great prizes.

Kids under 10 get in for free.

There will also be silent auction with some great gift baskets just in time for the holidays.

Free entertainment will be provided by a long list of local performers including the pipers who represent various police and fire departments throughout the region.

Other bands include Frogwater and Ceol Cairde.

Kevin Lynch and Sean Finnegan were special lives guests Friday on the CBS 58 News at 4 p.m.

Their interview with CBS 58's Michele McCormack is attached to this article.

The band was established to perform the music of the Highland bagpipes  and drums for memorial ceremonies, funerals, and other events relating to the Protective Services and the U.S. Military.

The original members of the Band were either active or retired members of the Milwaukee Fire and Police Departments. There were ten students in the original group. The first Pipe Major and primary instructor was Katie Higgins (now Berigan), who led the Band in its formative years.

Membership has expanded to the larger community of Firefighters and Law Enforcement Officers in Southeast Wisconsin as well as members of the community at large.

The unit has the distinct honor to play at all of the Milwaukee Fire Department and  Milwaukee County Law Enforcement Memorials since our founding. In addition, the band also performed at many Fire and Police memorial ceremonies around the State of Wisconsin.

has traveled to Washington DC (2008 & 2012) to perform in the National Law Enforcement  Memorial and to Colorado Springs, CO (2009) to participate in the IAFF Fallen Firefighters Memorial ceremonies.

Band member Dan Schmerse took over the duties of Pipe Major in 2008.

In the winter of 2008-2009 the Greater Milwaukee Fire & Police Pipes & Drums began joint practice and playing sessions with the Celtic Nations Pipes  & Drums. The Shamrock Club Pipes & Drums joined the group in 2010.

In 2010, the  GMFPPD joined the Midwest Pipe Band Association and, under the musical direction of Ringo Bowen and leadership of Pipe Major Dan Schmerse along with the renewed efforts of the members, the Band entered Grade 5 competition at the Highland Games at Milwaukee's Scottish Fest. The event was held at Hart Park in Wauwatosa, WI and the Band, in it's first competitive outing, received an award for second place.

Some of the  most memorable events include the performances at Milwaukee's City Hall at ceremonies honoring departing Archbishop Timothy Dolan and since May 2, 2010, they have had the honor of performing at General  Mitchell International Airport, as WW II and Korean Veterans have returned from their Honor Flight to Washington DC to visit the WW II Memorial.