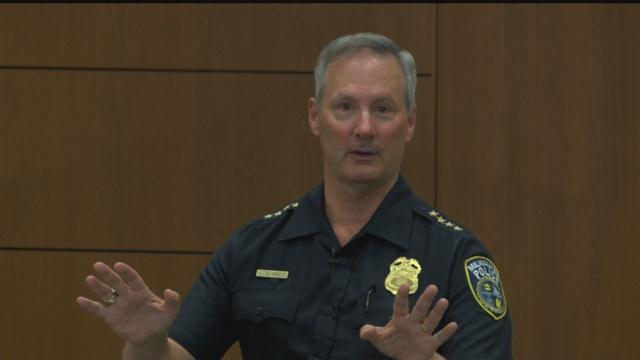 Chief Flynn says despite the public perception, his officers welcome the new technology.

Here is the Chief's statement:

\"If America has decided to give up its privacy in moments of its greatest family crisis so I can walk into your house when you've got crazy hair and your son is drunk on the couch throwing up on himself and somebody broke the furniture. If you are happy with that and if you are a public office holder and happy with the newspaper requesting so they can get the film of that moment of crisis in your life. If that's okay with you, that's sure okay with us.\"

There have been more than 100 homicides recorded in Milwaukee this year. That surpassed the total of all of last year.

But the Chief said monthly crime comparisons shows crime is down for August.

\"As of today, comparing August of 2015 to August of 2014, every single crime number is lower, including homicide.\"

The only exception was sexual assault.

Chief Flynn told his audience about the need for reform when it comes to gun laws.

\"This is far from unique,\" explained the Chief. \"The fact is that Milwaukee is sharing the identical issue with other major cities with similar dynamics and those cities that have points of inter-generational poverty aided by weak laws that make it easy for criminals to gain access to firearms, experience dramatic increases in violent deaths in those neighborhoods.\"