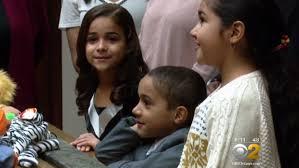 “We just attached and we fell in love,” said Angela about Gabriella, who is nine years old.

That love grew a few years back, when Gabriella also had a special Christmas wish: her brother and sister.

“I loved them and I wanted them to have a better life,” said Gabriella.

Angela reached out to her two sisters, who then decided to adopt Gabriella’s two siblings.

“My kids were grown and I didn’t want to start over,” said Angela’s sister, Kim Mitchel-Davis.

“My husband and I were single,” said another one of her sisters, Annette. “We did not have any kids.”

“There’s enough love in my heart to share and I fell in love with her,” Mitchel-Davis said.

“I took him in as mine and once I adopted him, that is my child,” Annette said.

On Friday, Nadia’s adoption was the last of the three siblings to be approved.

“We always been a close-knit family,” Mitchel-Davis said. “But it’s brought us closer now.”

“It took a little convincing,” Angela said. “But they did it and I am so grateful that they did.”

All three sisters live near each other in the south suburbs of Chicago. Two of the children attend the same school, and the families are almost always together.

Every day in Illinois, 1,000 children are waiting to be adopted.