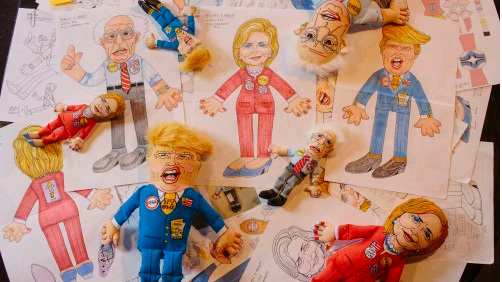 PHILADELPHIA (CBS) — The 2016 presidential race so far has inspired a Trump-themed Cards Against Humanity deck, craft beer and now “The Donald” is getting a dog toy made in his likeness. However, thecompany

that made the chewable plushes didn’t leave the others out–dogs will soon be able to chew on Hillary Clinton and Bernie Sanders toys as well.

“We designed these toys here in Vermont, and it all starts with sketches,” explained Sarah-Lee Terrat, co-owner of the pet line, Fuzzu. After years of designing products for Anne and John Lika’s pet line, Fat Cat, Inc., the three of them decided to go in on this latest project together. “We couldn’t help ourselves, as this election season is so captivatingly crazy, and we’re having fun making fun of the candidates.”

Fuzzu started their Presidential Parody Pet Toys on Kickstarter, raising $18,222 from more than 200 backers who will be getting their orders later in June.

The toys come in three different sizes including a  smaller cat-sized plushes and range from $7.99 to $34.99 which are all available for pre-order on the Fuzzu website.