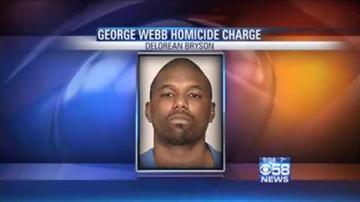 MILWAUKEE-Charges were filed Monday in the murder of a cook at the George Webb restaurant on Milwaukee's east side.

Evans was a 21 year old cook who came to help a waitress remove some unruly customers from the restaurant around 1:45 a.m. December 20, 2013

Schalanda Nichole Long, born on 7/10/1981, is charged with disorderly conduct

Here are parts of the criminal complaint. CBS 58 News has chosen to edit some of the explicit language and names of victims and some potential witnesses.

The complaint says a waitress reports a group of \"four people came into the restaurant, one was a black male and three were black females.\"

\"They all appeared to be drunk. Also in the restaurant was a white male named D. M. seated at the counter, along with a group of younger people seated in a booth nearby.

An argument began with D.M. and a second black male who joined the other four people sitting at the table. The man arguing with D.M. was identified as the defendant Delorean Bryson.

The defendant and the other black male left the restaurant and came back a short while later.

The three women were still yelling at Reginald Evans. The defendant then began throwing jelly packs and coffee creamers at D.M.

The defendant picked up a cup of chili as to throw it, and a restaurant employee, M.C., blocked the cup from hitting D.M.

The defendant tried to punch M.C.

These females were identified as Schalanda Long and Loycelyn Long.

Another worker called 911. The defendant left the restaurant with the other black male and as they walked out the door, the defendant stated, “pop the trunk.”