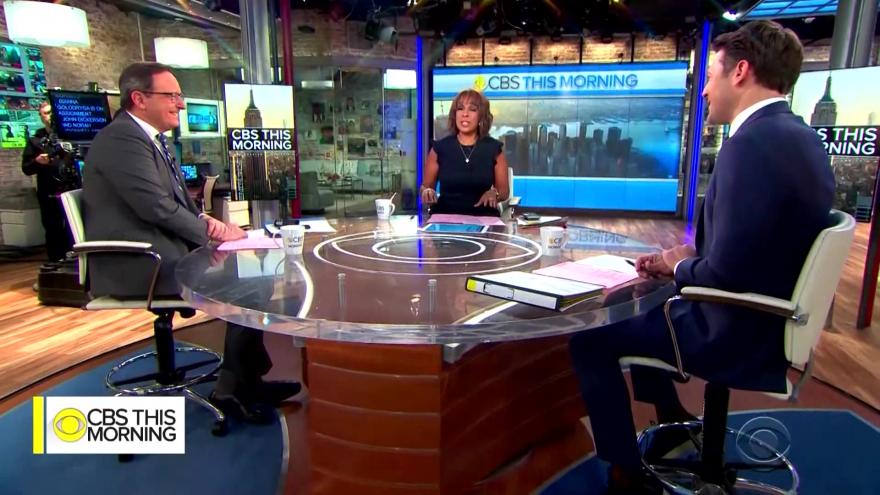 (CBS News) -- Gayle King will be joined by Anthony Mason and Tony Dokoupil as co-hosts of "CBS This Morning," and Norah O'Donnell has been named anchor and managing editor of "CBS Evening News," CBS News announced Monday morning. O'Donnell will also be the lead anchor of political events for the network and continue as a contributing correspondent for "60 Minutes."

John Dickerson, currently a co-host in the morning, will shift roles to report for "60 Minutes" and contribute to election specials.

The staffing moves were announced by Susan Zirinsky, who was named president of CBS News in January and took over in March.

"This is a start of a new era for CBS News," said Zirinsky. "Our job is to reveal America to itself through original reporting, strong investigative journalism and powerful political coverage."

"CBS Evening News with Norah O'Donnell" begins this summer in New York and will move to Washington, D.C. this fall on a permanent basis.

"Norah is one of the leading journalists of our time," said Zirinsky. "Her outstanding reporting, incisive interviews and dedication to the truth will distinguish the 'CBS Evening News' every night."

CBS News said moving "CBS Evening News" to Washington "adds to the importance and stature of the broadcast and will give CBS News unique access to top lawmakers, whose decisions have a profound impact on all Americans."

Zirinsky noted the new "dynamic team" in the morning. "Gayle's game-changing interviews, compassionate storytelling and authenticity make her one of a kind. Her unrivaled ability to connect with audiences makes 'CBS This Morning' relevant, relatable and the place you must start your day. Anthony Mason is an exceptional journalist who over his three decades at CBS News has interviewed everyone from presidents to legendary artists and has tapped into some of the most important stories in the world. Tony Dokoupil is a brilliant writer with a passion for delivering stories that matter. This new role will give Tony a platform to continue his standout reporting. We're incredibly excited to have this dynamic team together each morning."

Dickerson will remain based in New York, and contribute to political coverage. "John is a world-class interviewer and writer who uses history to create current context to the complexities of the day," said Zirinsky. "His insights into politics, culture and world events – past and present – will deepen the audiences' understanding of what matters and will add to the excellence of 60 Minutes and CBS News' Election specials."

"We are grateful to Jeff Glor for his award-winning work and his commitment to both his colleagues and to our viewers. As we transition the Evening News to Washington, we are discussing opportunities for Jeff to remain with CBS News and continue providing the same substantive, trusted reporting that he has been offering for the past 12 years," Zirinsky said.

In April, Zirinsky appointed a new executive producer, Diana Miller, for "CBS This Morning." In February, Bill Owens was picked to lead "60 Minutes."