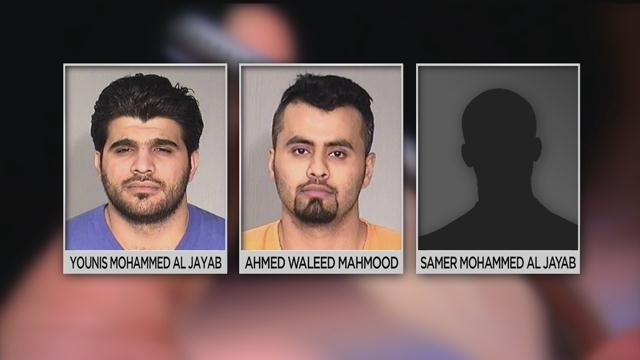 Officials say Aws Al-Jayab lied to investigators about traveling to Syria to join the civil war there in late 2014 and early 2015.

This new sketch shows Al-jayab in court in Sacramento this afternoon.
US Attorney Benjamin Wagner said that while the 23-year-old was potentially dangerous, there is no indication he planned any attacks in the US.

Three of Al-Jayab's relatives also facing charges but not connected to terrorism.
They were picked up for an illegal phone selling ring undercover agents traced to a 27th Street tobacco store. Two were in federal court in downtown Milwaukee Friday morning.  The third taken into custody in Sacramento.

Younis Mohammed Al-Jayab answered a phone call from one of our reporters a short time ago and told her he had no comment on the case.

And also, both of the men in court in Milwaukee today have been let out of the Dodge Correctional Institution.

The investigation into this family started back in 2014 when a source told police Younis Mohammed Al Jayab was buying illegal phones at 27th Street Tobacco and selling them overseas.

The criminal complaint says between November of 2014 to February 2015, undercover agents with the FBI sold 32 new iPhones, a Macbook Pro, and a big screen TV that they presented as being stolen to Al Jayab brothers Younis and Samer and their cousin Ahmed Waleed Mahmood.

The undercover agents would meet with the family at a Walmart on the south side of Milwaukee and US Customs and Border Patrol says a number of those phones were shipped from Younis' home address to Cyprus.

More were sent to Romania, to a woman who is listed as Younis' fiancee on Facebook.

Younis admitted to the undercover agents that he was selling the stolen phones overseas for a profit.

The person who runs 27th Street Tobacco tells us at the time this illegal activity was happening--he didn't own the store-- the family actually owned it and he's got no comment on the investigation.

Meanwhile, the three defendants are facing five charges, including interstate transportation of stolen property and aiding and abetting.

According to Facebook posts, Samer was visiting his brother, the one facing the terror related charges, in California, so he will not be officially charged until he is returned to Wisconsin.