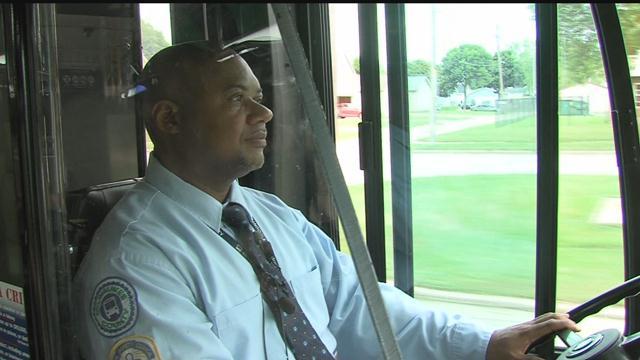 You can tell from his accent, Chris Martin isn't from Wisconsin.

But he can navigate Milwaukee city streets with ease after driving a bus for nearly 10 years. He was in the military before and decided to drive a bus to do something different.

\"You meet all different types of people everyday,\" he said.

That was the case Tuesday, August 18th, when a 93-year-old elderly man got on Martin's bus. Surveillance video shows him walking to the front. He was worried about catching his connecting bus to get to the VA Hospital.

So Martin stopped at 2nd and Wisconsin. Without hesitation, he gets off the bus with the elderly passenger to safely walk him across the busy downtown street.

\"It makes me feel good to know that I can help, especially an elderly person,\" he said. \"A lot of times people ignore them, but it's good to help when you can.\"

About 15 other bus riders witnessed the good deed and didn't mind the extra two minute wait.

\"What a nice driver, huh?\" said one man passenger.

Soon, Martin was back in the driver's seat continuing on his way.

\"More often than not, our drivers are doing not just the right thing, but amazing things for people,\" said MCTS spokesman Brendan Conway.

Martin said he was just doing what's right, and hopes his kindness has a positive influence on his young son and the community.

\"We're all people and sometimes we need help no matter what it is,\" said Martin.

A passenger on the bus nominated Martin for a commendation for his action on the job. Martin has received such praise before, five times in fact, over the last two years.