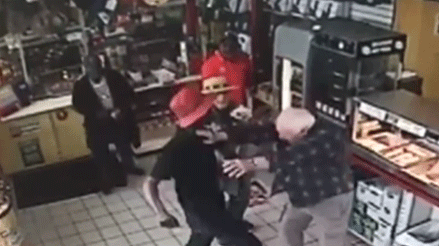 LAUDERHILL (CBSMiami) – Not one, but two wild scenes were caught on cameras in Lauderhill Sunday morning as a man went on a violent rampage.

The first happened at a Shell gas station at 1901 North State Road 7.

Surveillance cameras captured a man in a red hat enter the gas station and then leave.

When he comes back, he heads straight for an elderly couple, pulling a piece of metal pole from his pocket and hitting the man in the face.

The victim’s wife bravely shoved the attacker away.

The man then fled in a stolen Ford Explorer, making his way to a Swap Shop on West Sunrise Boulevard.

There he takes a samurai sword from a store display and begins slashing and whacking an employee.

The employee falls to the ground and tries to kick his attacker away.

Finally, the man runs off as the victims hurls something at him.

It’s still not known why the attacks were carried out.

Police said Walker had marijuana on him.

Both victims needed medical treatment – stitches for the elderly man and hand surgery for the shop employee. Thankfully, both men are expected to be okay.