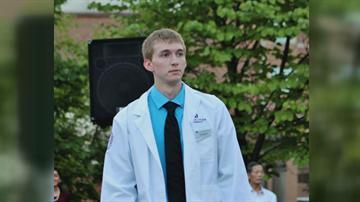 Twenty-year-old Waukesha native Nick Kapusniak was attending the St. Louis College of Pharmacy.  Late Friday night he was in a back yard with friends when someone driving through an alley fired shots.  Nick was hit and died at the  scene.

\"Any administrator of a school would love to have six or 700 of him because he just wanted to be part of a school  life, what his high school life was supposed to be,\" Hartmann said.

Hartmann reached out to Kapusniak's parents to offer his support.  Now he looks to help his school deal with the news.

\"Closure's always a challenge whenever there's a tragic death,\" Hartmann said.  \"But here at Catholic Memorial, we have the benefit  of we'll gather together with prayer and we'll open the day with prayer.\"

Benyousky and other counselors will be available to any student or faculty member who feels the need to talk.  The coach plans to reach out to certain students personally.

\"Help them work through what they might be feeling, be it sadness or anger or just feeling numb to it all,\" Benyousky said.

School leaders know most will view Nick's death as a senseless act.  But Father Hartmann hopes it starts a deeper conversation.

\"When it's that good, honestly sincere kid, that'll cause us to ask the tougher questions,\" Hartmann said.

Catholic Memorial students and faculty will gather for an Ash Wednesday mass as they normally would this week.  But Father Hartmann says a lot of the focus during that service will be directed toward Nick and his family.