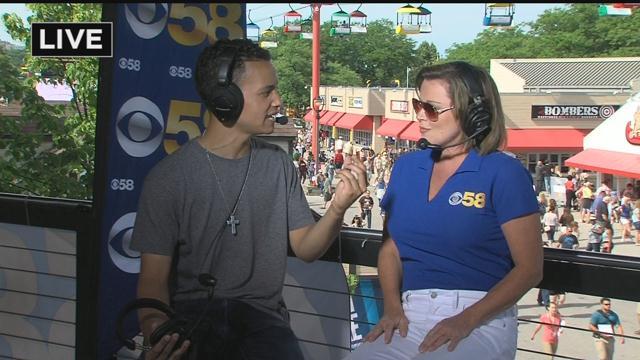 It's a big gig for Sam Guyton and  Generation Z.

The Milwaukee born and bred singer, musician and dancer spoke live with the CBS 58 News at 4 Wednesday before he took to the stage at the Harley-Davidson Road House.

"Anything that gets people moving, that's what I want to do," said Guyton with a wide smile.

The Michael Jackson tribute is among his favorites.

"He was the king, I'll never get tired of doing his music," declared Guyton.

Generation Z does a heart pounding performance covering several genres with a full set of back up dancers.

Guyton believes Summerfest is the perfect spring board for any aspiring artist.

Guyton is also a accomplished guitarist who choreographs many of the routines himself.

He actually began his career as a Michael Jackson impersonator with "We Are the Drum.

Never one to shy away from a challenge, he has also taken on the role of Morris Day in the "Prince Experience" show which has headlined year after year at Summerfest, as well as other festivals and in downtown Chicago.

Sam was the choreographer for Danny Gokey's "Sofia's Heart" organization and had the privilege of singing with Danny Gokey of American Idol fame.

Watch his interview here and be sure to watch the CBS 58 News at 4:00 and 4:30 every weekday of the festival.