Car vs Semi at Mitchell Interchange 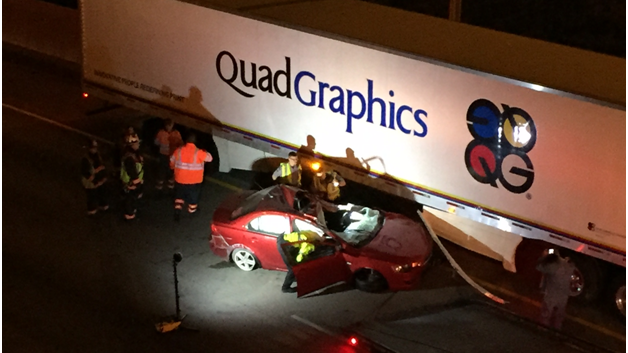 The two left lanes of the I-43 east bound to I-94 south bound system ramp in the Mitchell Interchange were closed for a time early Friday morning due to a car versus semi-trailer truck crash.  According to the Milwaukee County Sheriff's Office, the accident occurred around 11:45 PM when the mid-sized passenger car collided with the semi and became wedged under the trailer.  A tow truck was required to pull the vehicle out from under the trailer.  The MCSO reports that the female driver of the car was drunk at the time of the accident.   Greenfield Fire Department  transported the woman to Froedtert Hospital with what is reported to be only minor injuries.  The MCSO says she was released several hours later.  The woman was the only person in the car.  The Milwaukee County Sheriff’s Office is investigating the accident.