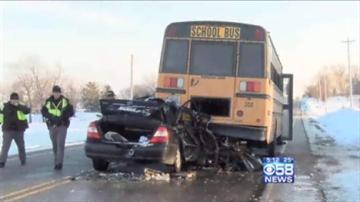 KENOSHA COUNTY-A Car and school bus collided Thursday afternoon  near the intersection of Highways 45 and 142, just east of the Bong Recreational Area.

The Kenosha County Sheriff's Office tells CBS 58 that there was one child on the school bus and that Flight for Life was called to the scene after a person in the car was pinned under the bus.

Video from the scene appears to show the front of the car striking the back of the bus.

Half of the car was crumpled and stuck under the bus.

\"At 1539 hrs today Kenosha County Sheriff’s Deputies responded with Paris Fire and Rescue and Bristol Rescue for a crash where a 2003 Toyota Camry rear ended a Dousman Transport Company School Bus that was stopping to drop off a student at 2218 STH 45.

The preliminary investigation shows that the school bus had activated the red stop lights in order to make a stop at 2218 STH 45 to drop off a student. The driver of the bus was about to activate the stop arm of the bus when the bus was rear ended by the Camry. It is unknown at this time what factors may have contributed to the Camry not stopping for the red lights of the school bus.\"