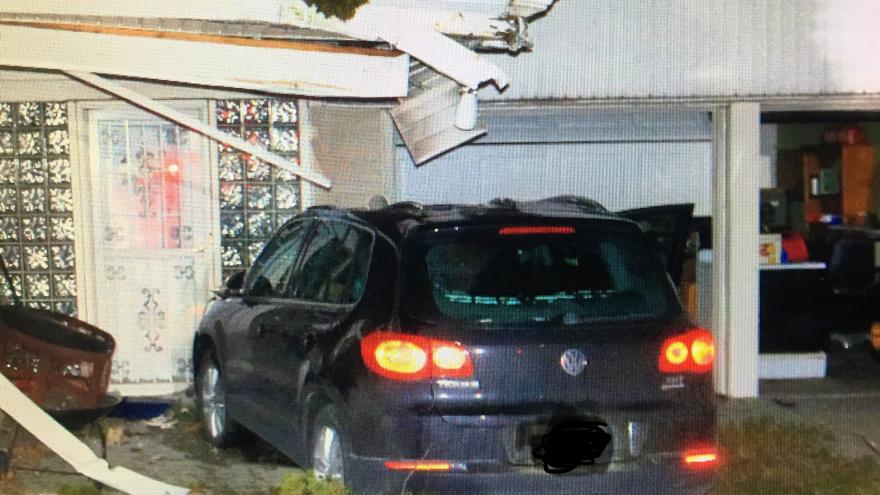 VILLAGE OF MOUNT PLEASANT, WI (CBS 58) -- A man crashes his car into a house and while police are investigating the accident, a woman drives through the scene disregarding squad cars and road flares.   Both are arrested and each is charged with Operating While Impaired.  It all happened early Sunday morning along Spring Street in the Village of Mount Pleasant.

According to the Mount Pleasant Police, around 2:35 AM, the car driven by Randy Strohkirch of Racine crashed into a house on Spring Street near N Ohio Street.   Police determined the car was headed north on Ohio at a high rate of speed, failed to stop at Spring Street, hit the opposite curb, became airborne, striking a road sign, vaulting over a guardrail and then crashed into the porch of a house.

After failing a Field Sobriety test, Strohkirch was arrested for his fourth OWI offense, Failing to Stop at a Stop Sign, Inattentive Driving and Open Intoxicants.   He was taken to the Racine County Jail.

While officers were blocking west bound traffic at Spring and Illinois Streets, another vehicle disregards the squad’s lights and flares and drove through the scene.   When finally stopped, officers detected the strong odor of marijuana and determined that the driver of the car, Jessica Barker of Racine, was also impaired.   She was arrested  Operating While Impaired and Possession of THC.   Barker was released to a responsible party.

The Mount Pleasant Police are continuing to investigate the incident and all of the charges have been referred to the Racine County District Attorney’s Office.