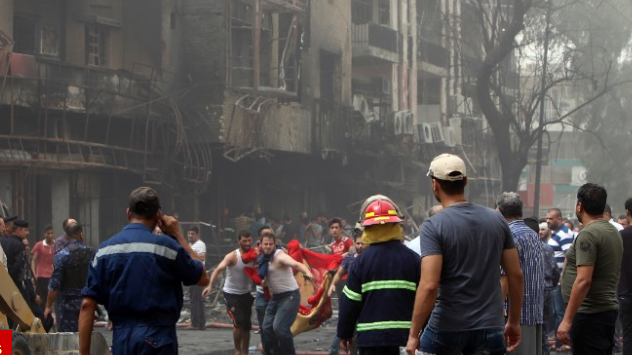 (CNN) Iraq's capital was once again the scene of bloody carnage this weekend, with two separate car bombs killing at least 126 people.

The first detonation occurred Saturday on a busy shopping street in the central Baghdad neighborhood of Karrada, killing 125 people -- including 25 children -- and wounding 147 others, police said.

Firefighting crews pulled injured and trapped people from adjacent buildings damaged in the massive blast, including a coffee shop, stores and a gym.

The second bomb exploded at an outdoor market in the Shaab neighborhood of southeastern Baghdad, killing one person and wounding five others, police said.

The so-called Islamic State claimed responsibility for the Karrada attack in a statement posted on Twitter. The group claimed it was targeting Shiite neighborhoods. Karrada and Shaab are predominately Shiite.

"This is a cowardly and heinous act of unparalleled proportions, to target peaceful civilians in the closing days of the holy month of Ramadan including shoppers preparing for the Eid-ul-Fitr holiday," Ján Kubiš, the Special Representative of the United Nations Secretary General (SRSG) for Iraq, said in a statement Sunday.

"This shows Daesh's wanton intentions to kill, maim and demoralize," he added, using the Arabic language acronym for the terror group.

Is ISIS losing the war?

"Thief!" and "get out!" protesters were heard yelling, as Abadi and other officials attempted to survey the bomb damage. Many are angry at the government's apparent inability to maintain security in the capital.

Baghdad has witnessed a surge in the number of deadly car bomb attacks in recent weeks, with ISIS claiming responsibility for many of them.

One of the deadliest incidents occurred in Sadr City on May 17, when a car packed with explosives detonated killing at least 24 people and wounding 71 others, according to security officials.

That was followed by two more explosions in the al-Shaab neighborhood in the north of the capital, which killed at least 19 people and wounded another 44. A female suicide bomber may have been responsible for one of the blasts, the Iraqi Interior Ministry said.

Hundreds of new U.S. troops to Iraq a 'possibility'