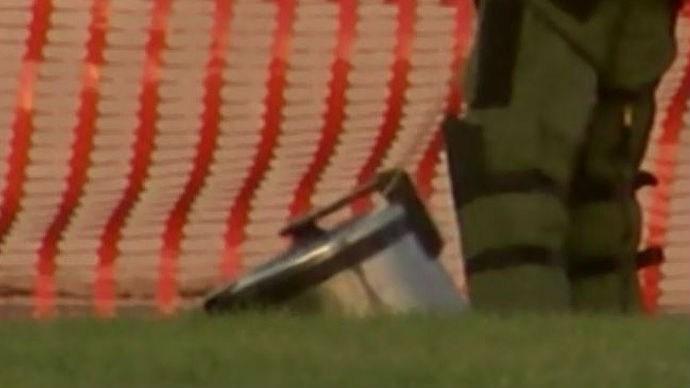 A pressure cooker in a parked car on the National Mall aroused the suspicions of Capitol Police in Washington on Sunday, and they called out a bomb squad to do away with it.

Officers spotted the car on routine patrol and found it suspicious. Inside were the pressure cooker and what appeared to be a propane tank. Officers smelled gasoline, U.S. Capitol Police said in a statement.

Police set up a security perimeter and closed off a short stretch of a street not far from the Capitol Building as a precaution. A bomb squad \"disrupted items of concern in the vehicle including the pressure cooker\" with a controlled detonation.

Police warned the public ahead of time that the detonation would cause a loud bang.

Video from CNN affiliate WJLA showed a specialist in a bomb protection suit searching a gray station wagon with its rear window smashed in.

The search and investigation turned up nothing harmful, USPC said. The driver was arrested and charged with driving with a revoked license.