Call to action on Police Appreciation Day in Milwaukee 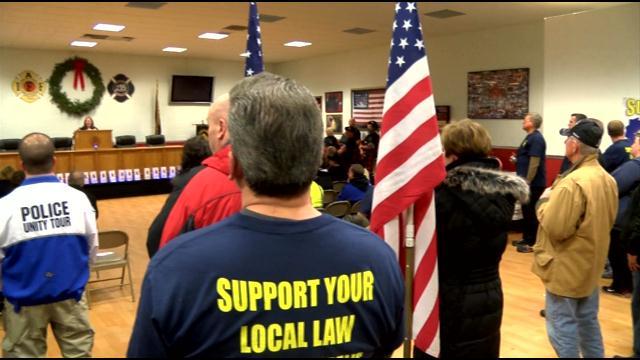 It's one thing to put a blue light out on your front porch in support of local police, but how are you really engaging the men and women in law enforcement and being part of the effort to protect our neighborhoods?

A call to action Friday night at a special Police appreciation event organized by the Milwaukee Police Association.

There have been strained relations. Just months ago, union members took a no confidence vote in the chief.

Several aldermen have complained that the mayor isn't giving enough money to help bolster those who are serving.

Yet, the Mayor was part of the gathering that included an officer's widow urging people to write a simple thank you note, right there on the spot.

\"I think it's high time people come together and show their support for our officers and the difficult job they have to do on a daily basis,\" said Alderman Bob Donovan who is running for mayor and has children on the force.

\"I've had constituents that got shot in the line of duty,\" added Alderman Tony Zielinski. \"They barely made it out alive. They're on permanent disability.\"

We found someone who took this message to heart holding up a thank you sign as we traveled around with Officer Thomas Kline as made his usual stops on his downtown beat.

\"I act as professional as I can.\" Officer Kline told CBS 58 News. \"I show people respect. If someone needs my help they're going to get my help. Ya know, you think outside the box and it's not just about pulling people over or filing their car that got stolen.\"

Kline is continuing a family tradition in law enforcement.

His grandfather was with the State Patrol.

Officer Kline says with recent anti-police protests he's actually seen an increase in citizens coming up to say thanks and buy him lunch.