California Jail Escape: 'You just don't know what they are going to do' 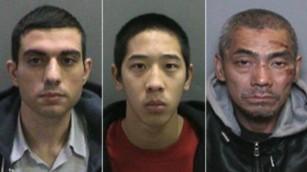 "I'm scared because these people are dangerous, and they may grab you or try to take your car," said a woman in the city of Westminster who would only identify herself as Carmen. "You just don't know what they are going to do."

About 10 miles east, Santa Ana gas station employee Mike Murched waits nervously for news about the inmates, who escaped just 3 miles from his store. He has been listening to the fears from his customers since the inmates broke out of the Orange County Central Men's Jail on Friday.

Last month, Murched was robbed at gunpoint -- prompting him to close the doors at 9 p.m. instead of midnight. Now, he's worried about more violence from the escapees -- "not just for me, but for my kids."  Authorities describe the fugitives as a trio of extremely dangerous men.

Nayeri allegedly attacked a victim in the desert, poured bleach on the person, set the victim on fire and then severed the victim's penis. The man survived, Orange County Lt. Dave Sawyer said.

Tieu is charged with murder and attempted murder for a gang-related attack. Authorities say he is a documented Vietnamese gang member.

Authorities are offering a $50,000 reward for information leading to the fugitives' capture.

Bounty hunter Zeke Unger said he believes that at some point, the fugitives may have to commit crimes -- "a carjacking, a home invasion, a robbery -- some way that they can gain income in order to keep on the move."n the surface, the Central Men's Jail may seem like an unlikely prison to have a breach. The barren-looking facility houses more than 1,000 sentenced and pre-trial maximum security inmates.

But it's had plenty of escapes before.

Within five days of the jail's opening in 1968, an inmate escaped by wiggling under loose mesh wire and using a garden hose to climb from the roof, the Orange County Register reported.

In 1983, an inmate escaped by cutting through the chain-link roof cage and sliding down bedsheets, the Register reported. The fencing was reinforced.

And in 1988, five inmates climbed over reinforced fencing, cut through wire and use braided sheets to rappel down the building, according to the Register. While four managed to escape, the fifth was caught after breaking his leg in the attempt.Last week's jailbreak seemed like a cross between the upstate New York prison escape last year and a fictional movie plot."This was a very sophisticated escape," Orange County Sheriff's Lt. Jeff Hallock said. "They cut through a quarter-inch metal plate. They crawled through unsecured plumbing tunnels to the roof. They cut through steel rebar."

After that, the trio used sheets braided into ropes to rappel down four to five stories -- about 50 feet, he said.

And it's possible a fight that broke out at the jail was staged to distract staff members.

There were two head counts conducted the day they escaped -- one at 5 a.m. and the second at 8 p.m., Hallock said.

"We think they escaped after the 5 a.m. head count," Hallock said. Sometime around 8 p.m. there was a fight, which authorities suspect was staged to distract and delay the second head count.

The inmates were housed in an area with about 60 other inmates, Hallock said, but it's unclear whether other prisoners saw the men escape.

A retired FBI supervisory special agent said he has no doubt the fugitives had assistance.

"These guys had to have help to begin with to get out of the place," Steve Moore said. "The same people who helped them up to that point are going to help them later. And so they probably had someone waiting."Not everyone in Southern California is worried about the fugitives.

On Monday, a father played with his two young children on the vast lawn outside the Central Men's Jail.

And the fugitives haven't stopped nearby residents from going out at night.

"I'm not scared to be out and about in Santa Ana. I still feel safe," bartender Ricky Zollinger said. "It's probably because just like any city, we have our good and our bad parts. The level of danger is already there."

He said some of his customers at The Olde Ship British Pub and Restaurant have casually mentioned the escape, but don't seem too alarmed.

Zollinger said he doubts the fugitives will show their faces in public.

"I think that if they've broken out of jail, the last thing they'll do is try to draw attention to themselves."