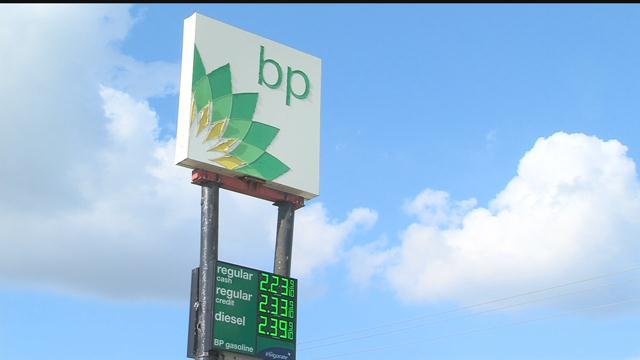 Caledonia police are asking for your help after more than 1300 gallons of gas was stolen from a local gas station and CBS 58 has exclusive video of the thieves in action.

Each visit, these thieves took hundreds of gallons of gas and the store's owner was none  the wiser because it never showed up on the books. In fact the only record of the theft is the surveillance video.

Take a look at this surveillance video from August 3rd. Under the bright lights of the BP gas station on 7 Mile Road in Caledonia, this man drove his bright red van up to the pumps and filled up.

You can see in this video, the thieves are filling up what police believe are 55 gallon drums inside the van and then filling up his van as well before driving off.

Between July 25th to August 3rd, the suspect hit the gas station three times; each time bringing an accomplice to help.

Peter believes its being resold.

"Maybe selling gas for small kind of business people because that premium is mostly used for lawn mowers or small machines," he said.

The thefts happened between 12-2AM when business is slow, so the store is closed.

During those hours the pumps only work with a credit card, but these thieves used a device to bypass the credit card reader, leading Peter to think it may be a pump technician.

"They have some password that decoded the pump. And then they open it up and fill up," said Peter.

He says his business is already struggling because construction moved his entrance away from the freeway and frontage road.

And even with insurance, he will be footing the bill.

"The money lost is out of my pocket," he said.

The store's computers only store surveillance video for 15 days, so Peter believes more gas was stolen than he can even prove. Meanwhile, anyone who knows the suspects or recognizes their vehicles is asked to call Caledonia Police: 262-835-4423