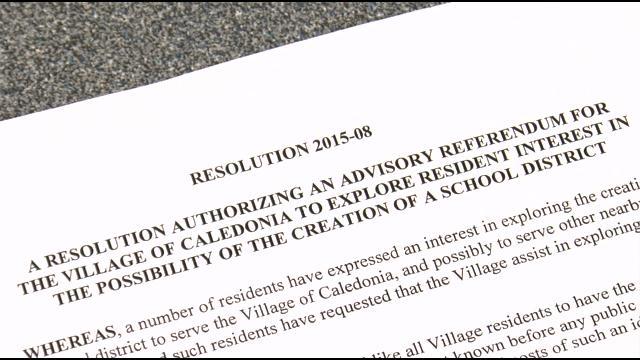 At least one local town wants to pull away from the Racine Unified School District and form their own. Though residents of the village have been working to separate Caledonia schools from RUSD for nearly a decade a special meeting  held on that subject Monday ended in just minutes.

\"The commute. It's hard enough to send parents but the commute on the kids would help. Kids are driving to Union Grove, to Burlington, there's actually a couple parents in my area that send their kids to Cudahy. That's quite a drive,\"said Kim Hoover, a parent.

Hoover says she is all for separating Caledonia schools from racine RUSD. It's a matter that was voted on tonight by the village board of Caledonia.

\"Should Caledonia pursue a separate school district, independent of the Racine school district?\"  With a vote of yes from all board members, that question will now be posed to caledonia voters on the April 7th election.

Village president Bob Bradley says this vote isn't a call to action, but will be an opportunity to see if residents want to explore the possibility of creating their own district

\"I don't know how this vote will turn out. Some people are set in their ways. They don't want higher taxes,\" said Bradley.

But others, like Hoover says it will give kids stronger ties to the place they live.

\"So many kids in our area have school choice to Oak Creek, Union Grove and other areas. I think it would bring them back to our area the community where they live,\" said Hoover.

Bradley says the process is still in the infant stages and Wisconsin laws would need to change before it happens. But if enough people express interest in this April's election he says the village will foot the bill for a $30,000 study.