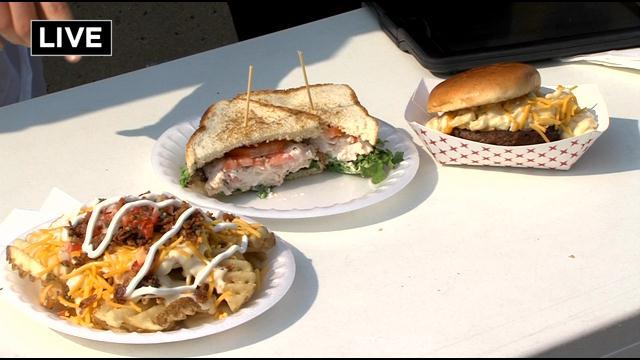 Get ready for your mouth to water.

A special treat during our live Summerfest Broadcast on the CBS 58 News at 4 p.m.

Burke's Irish Castle put its three most tantalizing items on display for Bill Walsh and Michele McCormack to sample. Let's just say, not even crumbs were left behind.

Burke's Irish Castle is located  54th and Bluemound.  It has set up a booth on the north end of the Summerfest grounds and has three main dishes.

The lobster and shrimp BLT,  made fresh every day.

\"It's so popular at Summerfest this year, that we're going to be offering it at our restaurant,\" explained Burke's server Steph LaHaye.

Another crowd pleaser is a heaping plate of bacon cheddar frachos.

At the restaurant at 54th and Bluemound, they use corned beef instead of bacon.

The final item for the hearty appetite is the mac and cheese cheeseburger.

It's a Burke's original item  with fresh ground Angus beef topped with homemade mac and cheese.

It's your meat and side dish in a self contained bun. You can get a complete meal, but still hold it in one hand and wander the festival grounds.

Enjoy the attached segment that appeared on the CBS 58 News on Thursday.