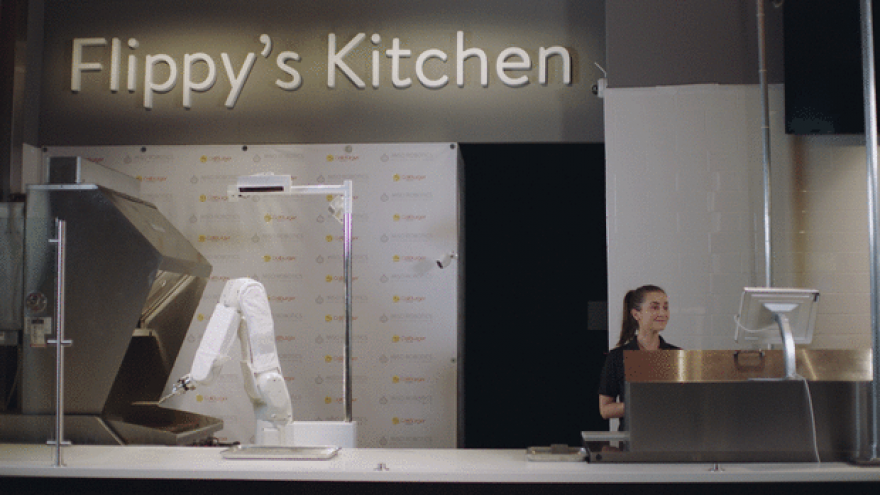 This is one robot that can take the heat.

"Flippy," a machine that costs $60,000 to $100,000, depending on its features, and is said to be capable of flipping 2,000 burgers a day, began helping out this week at a Caliburger restaurant in Pasadena, California.

After a human worker prepares and seasons the burger patties, Flippy pulls them off their tray and onto the griddle, flips them and then removes them so they can cool. Another person then puts the burger on a bun.

Many U.S. companies, especially in manufacturing-heavy industries such as automobiles, now automate tasks once performed by flesh-and-blood employees. Even in service jobs, like retail, technology is reducing the need for human labor. In January, for example, Amazon (AMZN) opened its first artificial intelligence-powered store in downtown Seattle, which lets people shop with their smartphones and does away entirely with cashiers.

A 2017 analysis by research firm CB Insights found that at least 10 million U.S. jobs are at risk of being automated over the next decade.

That trend is heightening concerns that robots, along with other technologies, will displace workers. Three-quarters of respondents to 2017 survey by the Pew Research Center said it was "somewhat realistic" that robots and computers would one day do most of the work now done by humans.

John Miller, CEO of the Cali Group, which owns the Caliburger chain, said it teamed with Miso Robotics not to replace employees, but rather to curb the company's high turnover.

Still, "There will be changes in the way workers are hired and the types of jobs available," Miller conceded in an interview with the BBC.

David Zito, co-founder and CEO of Miso Robotics, said Flippy is intended to help cooks and others in the kitchen. "Our mission is to improve working conditions of chefs and line cooks with assistants, not replace them," he said.

Most kitchen jobs appear to be safe as Flippy's skills are limited and the robot only knows how to cook burgers one way -- for now. According to CB Insights, cooks and servers in the U.S. -- a workforce of more than 4 million people -- face the greatest threat from automation, followed by cleaners, and movers and warehouse workers.