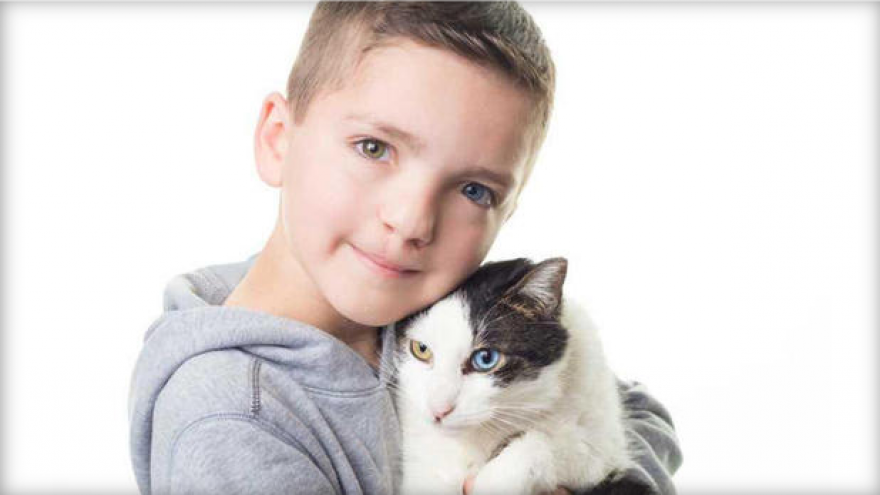 (CBS NEWS) Seven-year-old Madden Humphreys was born with a bilateral cleft lip and palate, as well as a condition known as complete heterochromia iridum, which means his eyes are two different colors. While his cleft lip and palate have been corrected with surgery, Madden still bears a scar from the procedure. And now, he bears the weight of his peers' scrutiny as well, as he is bullied in school for both the scar and his unusual eyes.

"He is usually just completely full of life and happy and fun to be with," Madden's mom, Christina Humphreys told "Today" on Monday. "He wasn't [insecure] until other kids started pointing it out to him and then saying not nice things."

Christina Humphreys wasn't sure how best to help her son, until she stumbled across an eye-catching Facebook post in a group for mothers of children with cleft lips and palates. The post contained a picture of a cat, waiting to be adopted from a Minnesota animal shelter, that had a cleft lip.

And as fate would have it, the similarities didn't stop there. To Humphreys' surprise, the cat in the picture also had two different colored eyes -- one hazel and one blue -- just like her son.

"We knew immediately that this kitty was meant to be part of our family," Humphreys wrote in an emotional blog post on Love What Matters. "They were destined to be best friends. Funny how a pet can make you feel less alone."

So, thanks to a few generous friends and strangers who helped fund the voyage, the Humphreys piled into their car for a road trip and traveled all the way from Oklahoma to Minnesota to bring the cat home.

"I'm stunned at how this all played out. It sounds silly, but fate willed these two together," Humphreys gushed in her blog post. "There's no other explanation. This kitty was so far away from us. I'm amazed that we found out about him, and even more amazed by the friends and strangers that helped us get to him, and adopt him. Everyone needs a friend, and everyone needs to feel understood. I'm so thankful Madden has Moon... I hope Moon helps Madden realize that being born unique in an incredible thing; that he is magic."

The Humphreys now document the pair's adventures on a special Instagram page, called Madden and Moon, where the photos are quickly going viral and people across the world are reveling in the duo's inspirational story.

"You are my hero!" exclaimed social media user @mojorisin67 on the page's inaugural post. "And how blessed are you to find such an incredible friend! If I'd have had such a pal when I was young, all the bullying and name calling may have been easier. I also was born with a cleft lip and the kids were mean mean mean. I'm so happy you have Moon and I support and love you both!! #cleftstrong"

"That is spectacular that you were able to find such a purr-fect match for your son," chimed in Instagrammer kells_bells_24. "Truly meant to be."

At a time when the ills of social media are on full display in national headlines, it's uplifting to see its powers used toward good -- that the picture of a cat in need could somehow make its way to the mother of a little boy in need, nearly 1,000 miles away. And it's heartening to know that, when presented with such a serendipitous story, generous strangers will chip in to help bring it to fruition.

"We're usually not spontaneous people, but we knew that we were meant to love this kitty," Humphreys wrote in her blog post. "In a word full of bullies and hateful words, we will choose to chase love. I think it's safe to say that this kitty is love, and was certainly meant to be part of our journey and Madden's journey."