Buffalo's curse: After the snow, warmer temps and rain 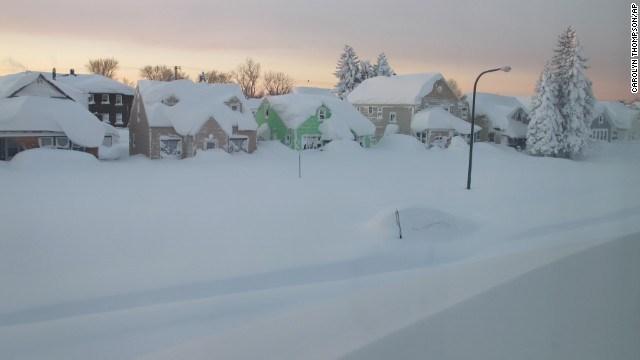 (CNN) -- After insane amounts of snow and bitterly cold temperatures this week, the Buffalo area begins to thaw out Saturday.

The good news: Warmer temperatures will begin to melt some 7 feet of snow across the region.

The bad news: Warmer temperatures will begin to melt some 7 feet of snow across the region.

Saturday's high should reach 40 degrees, but with it comes rain.

The whole area is under a flood watch. The National Weather Service says flood-prone areas will be inundated, but warns there will be general flooding too.

\"(We) expect 5 to 6 feet of water in some areas in a short period of time,\" Erie County Executive Mark Poloncarz said. The risk of flooding extends into Tuesday.

Swift-water rescue teams are in place, along with helicopters, should anyone get caught in the deluge of runoff waters.

There's another problem too.

Heavy snow threatens to collapse more roofs before it melts.

Some roofs already have crumbled, but rain may collapse more, in part because the already heavy snow perched atop buildings will soak up this weekend's rain before it melts, Erie County officials have said.

Some major roads opened on Friday, like the New York State Thruway, and some local driving bans were lifted . That allowed trucks to move so food could be delivered to stores and crews could remove abandoned vehicles, Cuomo said.

He added that no one should drive unless necessary.

\"If you have a nonessential purpose, now is not the time to be driving around,\" Cuomo said. \"The roads are still dangerous.\"

Snow and vehicle removals still are major tasks ahead. Erie County crews have had to deal with clearing 1,800 lane-miles of county roads before getting to residential streets, Poloncarz said Friday.

Cities and towns may have had more success with residential areas; 93% of hard-hit south Buffalo's residential streets had been plowed at least once by Friday, Mayor Bryon Brown said.

The latest of the 13 deaths to be counted is a 68-year-old man who died of a heart attack while snowplowing his driveway in Cheektowaga, according to Erie County Spokesman Benjamin Swanekamp.

The death toll also includes one senior citizen who died of natural causes after or while the person was evacuated Thursday from a nursing home in Cheektowaga, officials said. Earlier, authorities said two people had died, but they corrected themselves at an afternoon news conference.

And the storm forced the NFL to announce that Sunday's game between the Buffalo Bills and the New York Jets, scheduled to be played at the Bills' Ralph Wilson Stadium, will take place at Detroit's Ford Field on Monday night.

But even leaving the Buffalo area had its complications. Before meeting at the Bills' stadium Friday morning to get on a bus to the airport, some of the players had to be picked up by snowmobile because of driving bans in certain areas, team spokesman Scott Berchtold said.

At the Winchester Volunteer Fire Company station on Harlem Street, as many as 40 people stranded in the snow have sought shelter since Tuesday. More than 6 feet of snow cover the streets. Abandoned cars are barely visible under the drifts.

Fire trucks can't leave the station. Attempts by firefighters to get out in an SUV were futile. One medic hopped onto a snowmobile to rush to a call. Other volunteers jumped onto ATVs to reach a home where the roof was buckling under the weight of the snow.

Maria Odom's two cats and a dog were rescued from the house.

At the fire station, driver Steve Randall's truckload of milk and eggs has served as the main source of provisions. Randall said he was stuck in his truck for nearly five hours before making his way to the firehouse, where people have been sleeping on tables to stay off the cold floor.

\"We've been eating like kings for a while, but now we're running out of food,\" he said. Firehouse occupants have been making quiche, served with milk and bread from a store across the street.

From the Tops grocery store nearby, people hauling bags of food headed out into the snow by foot. One man dragged groceries in a sled; another pulled his child through the snow in a laundry basket. Robert Mead embarked on a 5-mile trek to bring formula to his 9-month-old baby.

Residents just stared out their windows at the mounds of white stuff, if they could see out at all.

In East Aurora, Lisa Gutekunst's home was capped with more than 4 feet of snow, she said Thursday.

\"The snow is coming down so hard you can't see out the window,\" she said. \"We've cleared our driveway so many times that we've run out of places to put the snow.\"

The 86 inches that fell in some areas in three days is a year's worth of snow. In a typical year, Buffalo's snowfall totals about 7 feet, according to the National Weather Service.