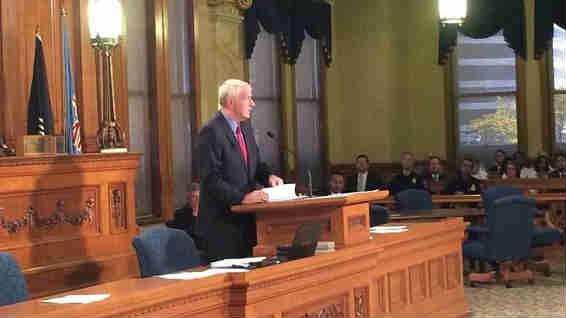 Milwaukee's Common Council engaged in extensive, and at times, heated discussion over police officer staffing levels Friday. Mayor Tom Barrett pushed to have the council vote against two new budget amendments. After the Mayor proposed adding about 85 officers - with a net gain of 12 on the streets for 2015, the finance and personnel committee decided they weren't having it. Last Friday, two amendments came forward peeling those additions back. The committee voted to cut the 12 additional officers - there would only be 73 new officers next year - along with adding common council approval for the Milwaukee Police Department to use $1.2 million for overtime.

\"Those officers properly deployed, I have confidence in the chief that they would be, can make a huge difference in stabilizing and making safer our neighborhoods,\" Donovan said.

But the 8th district Alderman also took a pop shot at the Mayor by following up with: \"The Mayor has found religion...I can't believe that he is now the biggest champion for more cops ...it never ceases to amaze me what some people will do for political gain...(laughter in the background) one might even think he's in the middle of an election.\"

Meanwhile, Alderman Willie Wade says the usual response is to just add more police. He said the council should look at other ways to solve the crime problem.

\"The approach that we've done in the past has been let's throw more officers at the situation, [that's] is going to solve it,\" Wade said.  \"That approach has not worked.\"

Mayor Barrett says he never hears calls for fewer cops on the streets. Most of the time it's the opposite.

People or city leaders typically call for more cops on the street. The mayor says this isn't the time to be cutting from public safety. He says the decision doesn't make sense, but that some members of the council are trying to make a statement.