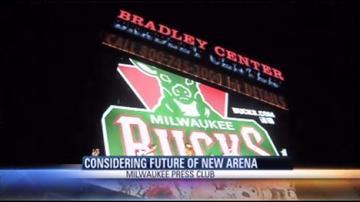 (MILWAUKEE)--  Governor Scott Walker talked publicly about the Bucks sale for the first time since it was announced last week.  While on the campaign trail in Port Washington on Monday, he said having the team here contributes to Wisconsin being a \"major league state,\" but the final decision on whether the team will get a new arena will not be made by him.

An espn.com report that says the Bucks could be sold back to the NBA if a new arena isn't built in Milwaukee.  (Link: espn.go.com/nba/story/_/id/10818521/nba-buy-milwaukee-bucks-no-arena-construction-2017)

The current and future owners of the Bucks have pledged $200-million towards building a new arena in downtown Milwaukee, but recent estimates show that at least another $200-million would be needed.  One way to make up that gap is an arena tax.

While any new tax to fund an arena must be approved by the state legislature, and would ultimately land on the governor's desk, Walker says he will not support any tax that isn't put to the voters first.